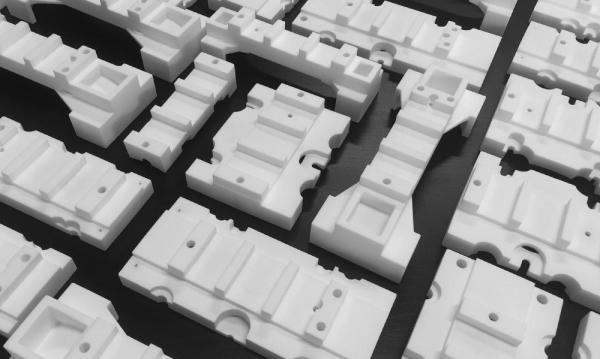 In this 3-part series of articles from 3DPRINTUK, Nick Allen will be considering the important issue of Design for Additive Manufacturing (DfAM). Part one beings by addressing the evolution of product design to provide the context in which 3D printing emerged, and how today’s design processes inform the successful uptake of industrial 3D printing.

The history of 3D printing/additive manufacturing (AM) dates back almost 35 years and as a technology set, it proved to be disruptive across many industrial sectors and continues to evolve and disrupt to this day.

Back in the beginning, what is now referred to as AM or industrial 3D printing began its journey as a technology universally referred to as “rapid prototyping” or RP. This was because it was viewed as a technology that singularly allowed design engineers and manufacturers to easily, quickly and cheaply produce physical prototypes of their new products or components.

It is also pertinent to remember that back in the 1980’s digital design was also still relatively new. Indeed, it was progress with 3D CAD that went some way to facilitating 3D printing itself. Product development — including design — is an iterative process, and getting a product from idea to manufacture involves a great many steps, often in a linear/circular way. This includes going through numerous iterations of a product to optimise it — factoring in market research feedback and manufacturability. Designing for the manufacturing process of choice has always been a thing.

When 3D printing really broke through as a means of rapid prototyping in the 1990s, it offered companies a viable and economically attractive way of producing multiple design iterations to optimise the final product without extending lead times and often shortening them. It is also vital to note that “rapid prototyping” and “3D printing” — then and now — are used as umbrella terms for a number of different additive processes. There are seven additive manufacturing process types in total.

The very first process was Stereolithography (SLA), a VAT polymerisation process that used resin materials, which resulted in the first commercial 3D printing system — the SLA-1 — from 3D Systems Inc. This was closely followed by two more: the Selective Laser Sintering (SLS) process, originally developed at the University of Texas and commercially licensed by DTM Corp; and the Fused Deposition Modelling (FDM) process developed and commercialised by Stratasys Inc. SLS now falls under the generic process name of Powder Bed Fusion (PBF), while FDM comes under the Material Extrusion process name. The other four additive manufacturing processes that are now firmly established are Material Jetting, Binder Jetting, Directed Energy Deposition, and Sheet Lamination.

The major advantage that 3D printing offered for rapid prototyping and the reason it took hold is that it enabled a concurrent or simultaneous engineering approach that eliminated the existing linear/circular “over-the-wall” silo culture of product development and drastically reduced design to market times and costs.

Throughout the 90s early adopters highlighted progression by including tooling managers in the product development process much earlier — sometimes just days into the product life-cycle rather than the traditional weeks or months it would usually take. As a result, they could provide valuable input that helped avoid costly mistakes and speed up time-to-market. Further evolution saw tools themselves become a key application of 3D printing — cue the moniker “Rapid Tooling.” This application area provided a highly cost-efficient way of producing tools for low and medium volumes of products. Again, this is still a viable application of AM technologies today.

As time moved on — and really getting traction in the last 10 years or so — 3D printing began to evolve from being a prototyping or tooling technology to a true “production” technology, highlighted in the terminology used to describe it today: Additive Manufacturing or industrial 3D printing.

With this shift, the ability for AM to continue its “disruptive” role was redoubled, as now the focus was on “if” and “how” the various AM processes, together with new and improved materials for AM, could truly replace or complement traditional manufacturing processes. The development of more robust, accurate, speedy, repeatable and cost-efficient machines, especially with the PBF process has reinforced the importance of industrial 3D printing as a true production technology, and today opportunities exist for intelligent and judicious use of it as a viable and competitive serial production solution.

However, it was this shift that has also meant that design engineers that are developing products that will be produced with AM — or considering it — have had to alter their approach to design. As I mentioned before, designing for the manufacturing process has always been a thing, whether for injection moulding, casting, or CNC machining.  The point here is that for Additive Manufacturing, the design rules are a bit different, in fact, they kind of break the mould!

In part 2 of this series, we will look at just how different DfAM is from traditional design for manufacturing approaches, the opportunities this brings in terms of product innovation and functionality, and the ability to optimise products in a way that reduces weight and material usage.

Keep an eye out for part 2, released next week!