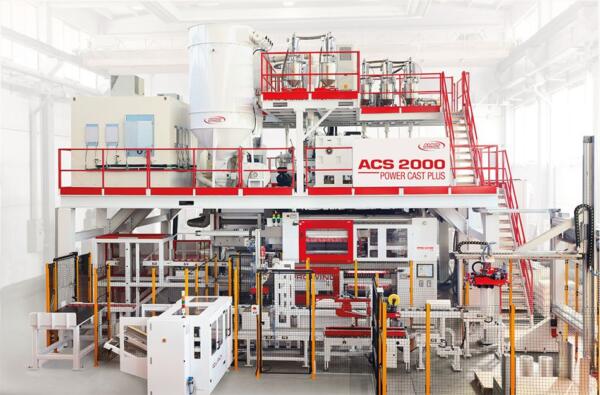 Most anticipated is the Q-Catcher, the recently developed patented system. The Q-Catcher concept has been presented this year during the Stretch Film Conference in Barcelona, the Plastics Extrusion World Expo held in Cleveland, Ohio and the Chinaplas exhibition in Guangzhou but only the K Show will host a demo live for the first time.

The Q-Catcher permits the repetition of previously saved parameters with the reproduction of the film having identical mechanical properties. The ACS 2000 has a 7-layer – 5-extruder configuration and a useful width of 2.000mm. The output is around 1.300 Kg/h, and the film thickness has a range from 6 to 25 μ. Production speed of 850 m/min and mechanical speed up to 1000 m/min. The upgraded technology includes the T-Die Essentia (AMUT branded) with die splitter, movable vacuum box for cleaning without dismantling, jumbo type chill roll unit 1500+450mm diameter, AD Scan X-Rays thickness control system, the Prowind 4.0 super-fast winder for hand, machine and jumbo rolls without any hydraulic components.

AMUT GROUP carries on with the motto “Go Green” firstly launched during Chinaplas 2019 edition and offers several solutions to support the circular economy. The friction washer patented machine exhibited, performs intense PET/HDPE/LDPE washing and pollutant removal action. Thanks to the strong cleaning force of the friction washer, the outgoing flakes have the quality required to be re-used in many applications. 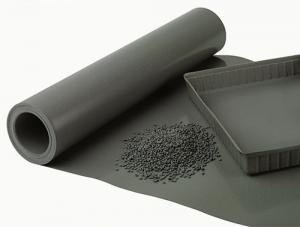 Significant attention will be dedicated to the project carried out in partnership with Ecoplasteam Italian company for the POAL (Tetrapack® waste) recovery. POAL, coming from the paper mill after being sorted from cellulose, is washed and pelletized into Ecoallene material. The entire treatment process is completed with AMUT equipment. Ecoallene pellets are suitable to be extruded and thermoformed or processed by injection moulding as well.

AMUT also proposes the line concept for Bottle to Packaging application developed in collaboration with Erema. The extrusion line is designed to process 100% post-consumer PET bottle flakes into single layer foil certified food-grade thermoforming foil — direct FDA extrusion process. The line has a net width from 1.000 to 2000 mm, configuration with one layer, three layers or up to 5 layers upon request. The thickness is from 0.15 to 2 mm, and the output is up to 2000 kg/h. In-line thermoforming plant for PLA cups will have a video shown: the AMUT technology – both extrusion and thermoforming units – can handle production with easy and fast change from PP to PLA.

The ACF820 thermoforming machine to be presented at K Show has three stations – forming/cutting/stacking, mould size of 820 x 650 mm and includes the following options:

The ACF820 will be in operation with 100% r-PET foil produced with the above-mentioned AMUT/Erema line. Demo also with metallised foil in GLUE LESS™ technology. The 4-cavity mould is for a dinnerware set composed by a charger plate and a soup plate. ACF series is driven by EASY software, the smart HMI developed by AMUT-COMI software engineers.