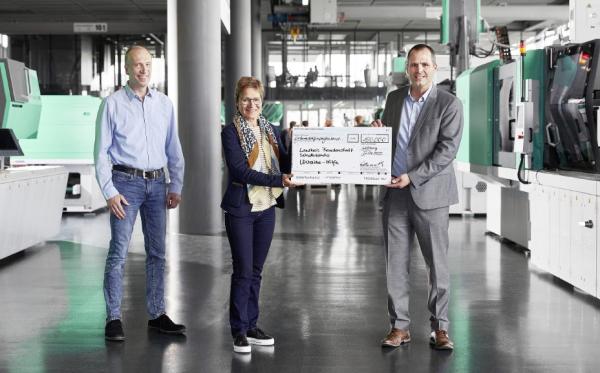 Arburg’s fundraising campaign for refugees from Ukraine, which ran for three weeks, has been a resounding success. The donations made by employees were tripled by the company’s partners, raising a grand total of 150,000 euros.

On Wednesday 27 April 2022, Managing Partner Renate Keinath (centre), Head of HR at Arburg, and Thomas Brunnenkant (left), Head of the Works Council, handed over the donation cheque to Reinhard Geiser (right), Deputy District Administrator of the district of Freudenstadt for 150,000 euros, to aid refugees caused by the ongoing conflict in Ukraine.

The fundraising campaign was launched by Arburg’s Partners and its works council at the end of March. It was publicised widely throughout the organisation, including in a video message recorded by Renate Keinath which was published on the intranet.

The campaign lasted three weeks, during which time the employees in Lossburg donated a total of approximately 50,000 euros. Arburg’s Partners and directors then stepped in to triple this not insignificant amount.

Donations directly to those in need

The money raised is being donated to the Ukraine Aid fund managed by the district of Freudenstadt, which supports not only Ukrainian refugees in the partner district of Tomaszowski in Poland but also refugees arriving in Freudenstadt from Ukraine.

The symbolic cheque was handed over to Reinhard Geiser, Deputy District Administrator of the district of Freudenstadt, by Renate Keinath and Thomas Brunnenkant.

Reinhard Geiser thanked Arburg’s employees and Partners on behalf of the district: “A donation of this size is hugely significant for our campaign, which is now also benefitting from support from other districts.” He explained that having direct contact with the partner district in Poland, where approximately 20,000 refugees are arriving every day, was an advantage because the volunteers on the ground can share information about exactly what is needed at any given time.

“We can use some of the money donated to purchase specific items such as sleeping bags, food and toiletries,” he continued, adding: “By doing this, we make sure that aid gets to the refugees directly.”