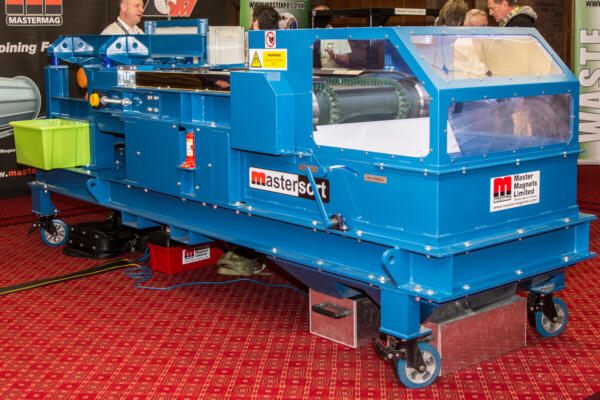 For the first time, the combined Magnetic Separation force of Bunting Magnetics Europe Ltd and Master Magnets will be on stand 5P80 at RWM 2017 (NEC, Birmingham, UK 12th – 14th September 2017).

Bunting Magnetics acquired Master Magnets in January 2017 and the two companies have annually exhibited separately at RWM, the UK’s leading waste and recycling show.  The joint stand will be the first time that the companies have combined forces at a major international exhibition since the acquisition.

Both Bunting and Master Magnets have a rich and long-standing history of supplying separation equipment to the recycling sector and the acquisition creates a world-leading manufacturer of Magnetic Separators, Eddy Current Separators, and Metal Detectors.

The European division of Bunting Magnetics is based in Berkhamsted in Hertfordshire, UK and they have an extensive overseas network of distributors and marketing agents.  Master Magnets is based in Redditch, UK and is widely regarded as one of the premier global suppliers of Magnetic Separation technology for companies in the recycling, mineral processing, and mining sectors.

“RWM 2017 provides us [Bunting and Master Magnets] with the ideal platform to demonstrate to our customers the benefits of the new partnership,” said Dave Hills, Bunting’s Head of Sales.

Bunting’s HISC has provided recycling companies with a much-needed solution for separating stainless steel.  Since the original conception, Bunting has developed variants and recently released the SSSC to recover stainless steel of a size up to 13cm (5”).

“Our stand will be interactive and dynamic,” said Dave Hills.  “We want visitors to witness metal separation first hand.  Ideally, we want people to bring samples.”

The Bunting Magnetics and Master Magnets stand is focused on recovering and separating metals.  In the recycling sector, this includes separating beverage cans from household refuse using an Overband Magnet; stainless steel from shredded computer hard-drives with the HISC, and small non-ferrous metals in an automobile shredding operation with an Eddy Current Separator.

“Recovering or removing metal is a vital stage in the recycling process.  Our Metal Separators are used to recover metal for on-sale as with UBCs, and to remove problematic metal as found in materials such as reclaimed plastic.  Fortunately, our team has a great deal of knowledge and experience and we work closely with companies to maximise the separation or recovery of the metal.”

Also promoted at RWM 2017 will be the popular range of Master Magnets Overband Magnets.  The designs include both permanent and electromagnetic configurations.  The permanent Overband Magnet is commonly used in Materials Recovery Facilities across the UK and Europe to recover steel from pre-segregated waste.  Larger and more powerful electromagnetic Overbands are used for more arduous environments and applications.

“With Bunting combining forces with Master Magnets, we now have a range of Magnetic Separators and Metal Detectors to suit all applications.  We are looking forward to meeting and helping visitors solve their metal separation problems at RWM,” said Dave Hills.

For further information on the Magnetic Separators and Metal Detectors that will be on show at the RWM 2017 exhibition, please contact us on press@buntingeurope.com.