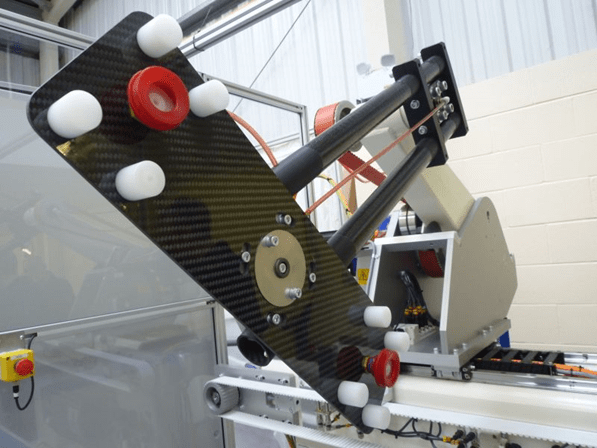 Coral Products PLC is a group of companies which represents the best of Europe’s injection moulding and blow moulding offering.

At their Haydock, UK facility, they provide contract manufacturing as well as their own range of rigid packaging. They also have their own range of recycling collection solutions and manufacture an extensive range of industry standard, food packaging containers (AA BRC Approved) which are supplied via the group’s Interpack Limited. Coral has recently acquired a contract supplying products for the automotive industry making car parts for high brand car manufacturers.

Coral’s philosophy is to always look at maximising production efficiency, so back in 2003 they contacted the team of DB to help them automate the manufacture of their multi-media production. Over subsequent years a number of systems were supplied to Coral for injection moulding automation. This continued into 2011 when Coral entered a new market for food containers. A high level of service and support was always provided, so again, DB Automation were recommended to the board by the engineers who had worked with DB for so many years.

“2017 is proving to be an exciting year for Coral Mouldings. As we embark on new ventures and enter new industries we are continuously looking for new methods to improve our efficiency and the quality of our products. Coral has worked in partnership with DB Automation for over 13 years and they were our first thought when we needed CFR systems to support our new venture in to the automotive industry. DB Automation have always been reliable, solution focussed and provided sound equipment that has stood the test of time.

As we look to the future DB Automation will play a vital role in helping us to create visual systems and provide further automation of our procedures to enable us to reduce cycle times and improve efficiency. We are grateful for the continued service they provide and are looking forward to our continued professional development together.”

Coral were looking for a system to allow them to produce products without having a fully automated system from start to finish.

By October 2011, Coral had placed another order for DB’s flagship CFR (compact, flexible robot) de-mould robot.  This was chosen by Coral due its take-out performance and its flexibility for deep products. The automation was again designed to de-mould and stack and then out-feed to operator packing area.

The CFR automation cell utilises a secondary take-off axis to handle the product and stack on an outfeed conveyor. Coral then ordered a further four systems.  Two of these were again for de-moulding and stacking bases, and the other two were for the corresponding lids.  The lid systems used DB’s side entry beam robot, which has a high performance de-mould stroke and is ideally suited to thin products.  This system again uses a common take-off axis for stacking.

Coral were delighted with the reliability, performance and support and in October 2014 they ordered a further CFR system.  This system was to see the completion of a whole mould shop dedicated to food containers all running with DB-Automation take-out systems.  With no more space in that mould shop for additional systems, growing demand and new product variants meant expansion into other areas of the plant was inevitable.

At the same time as providing the new system, a number of upgrades on existing installations were ordered to offer Coral greater manufacturing flexibility.  These upgrades included change-over end of arm tooling units and auto mould recognition, enabling other products to be manufactured safely and efficiently.

‘Fast-forward’ to the present, and following another successful period, Coral recently ordered a further CFR system and began their expansion into other areas of their facility.

The CFR robot supplied by DB is essentially a swing arm axis which can reduce the cycle times of beam (Cartesian) robots by 50%. The robots are easy to use with a very high level of reliability and extremely small footprint.

For more information on the CFR Robot

See the CFR robot in production