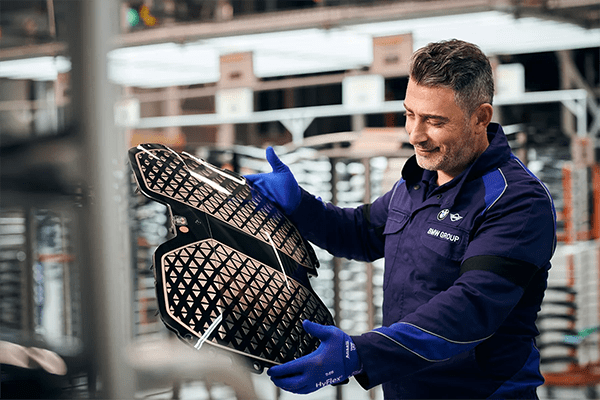 For the production of the kidney-shaped badges of the electric BMW iX, ENGEL developed a highly integrated cleanroom production cell for BMW that processes three materials in a single step; the innovative application was honoured with the SPE Grand Award 2021.

The BMW Group has launched a new ENGEL production unit at its Landshut production plant, where the kidney-shaped badges for the electric BMW iX are produced in a cleanroom atmosphere. Both the BMW Group and ENGEL are breaking completely new ground here, prompting the International Society for Plastics Technology (SPE Central Europe) to honour the application with the SPE Grand Award 2021.

Once the radiator grille, this characteristic design feature of all BMW models has taken on a new role following electrification of the drivetrains. The kidney-shaped badge protects the camera and several sensors for assisted and, in future, autonomous driving. The new function means that both the design and the manufacturing process for the kidney-shaped badge has changed fundamentally.

In an integrated process, a heatable functional film is back-moulded with polycarbonate and flood-coated with polyurethane. This is a combination of processes that ENGEL also offers under the name clearmelt.

Michael Fischer, Head of Business Development Technologies at ENGEL Austria, said: “We knew from the start that this process combination would enable automotive designers to think in a completely new way.

“With the technology already having been used for vehicle interiors, the kidney-shaped badges for BMW’s new electric models represent the next step. This is the first time that combined film back injection moulding and polyurethane flooding is being used in the series production of functional components on the exterior, where they are exposed to particularly high stress.”

The sensitive electronics are well protected under the scratch-resistant polyurethane surface. The high gloss level and depth effect, which even a thin coating of polyurethane achieves, convey a very elegant impression.

ENGEL is a system supplier for this demanding project, with responsibility for the complete production cell. In terms of process integration and automation, it meets particularly high requirements.

The production cell integrates an ENGEL duo combi M injection moulding machine with a horizontal rotary table, two large articulated robots for handling the films and moulded parts, a film cleaning system, an inline quality-control station and peripheral units including polyurethane technology. The injection moulding machine’s clamping unit and the robot work areas are encapsulated over a length of six metres and a height of more than four metres to achieve an ISO class 7 cleanroom. The special feature: Above the injection moulding machine, the cleanroom has a sliding ceiling that can be opened for mould changes and other work in the mould area. All work steps in the cleanroom are automated. The robots also unpack the function films and pack the parts.

Another first: ENGEL virtually visualised the entire production unit as early as in the RFQ phase. Walter Aumayr, Vice President Automation and Peripheral Units at ENGEL Austria, added: “In the 3D simulation, we were able to guide our customer through all the production cell areas, see how the robots interact and assess the ergonomic aspects before construction of the cell had even begun.

“This is the future. Virtual reality means that we can give our customers even better investment security.”

As the system solution provider, ENGEL is the central contact for customers and system components realised in conjunction with partners. Partner companies for the production cell for the BMW’s new kidney-shaped badges include Hennecke from St. Augustin, Germany, for polyurethane processing, and Petek Reinraumtechnik from Radolfzell, Germany, for cleanroom technology.

Visit www.engelglobal.com/en/uk/ to find out more about ENGEL’s products, processes and services. Click here to read more news from ENGEL.