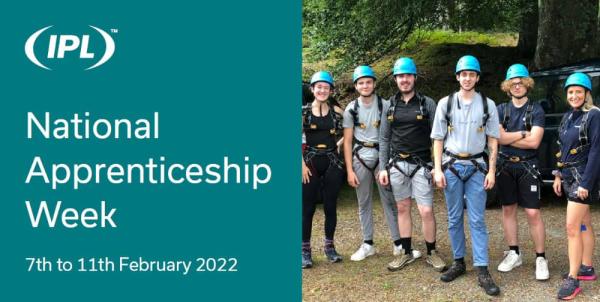 IPL UK will participate in this year’s National Apprenticeship Week from 7th to 11th February 2022. A week of activities is planned to promote IPL’s outstanding apprentices and its growing apprenticeship program, highlighting the essential role apprentices will play in the future of the sector.

Over 1,200 virtual and in-person events are planned for the weeks’ celebrations. As long-term supporters of apprenticeship programmes, multinational plastics manufacturing and recycling group IPL will be taking part in style, with events and activities planned across its six manufacturing sites in the UK.

Investing in the Future

Supporting upcoming talent is vital for IPL’s continued success, and so apprenticeships play a key role across the organisation. As a people-centric business, IPL feels it is imperative to continually develop new people who are either already appropriately skilled or can learn the skills required to do the job. With this and its large workforce in mind, IPL is well placed to provide an excellent platform for apprentices to learn new skills, providing ‘on the job’ training and experiences. The group places a significant focus on empowering and upskilling its staff, and when it comes to the next generation of talent, there is no exception.

As IPL’s Apprentice Programme Lead, Steve Goodland is one of the leaders and mentors who helped organise the National Apprenticeship Week 2022 activities. Steve comments:

“We’re incredibly proud of our apprenticeship programme, and apprentices play a key role across all functions within our business.”

“In terms of numbers, we currently employ 28 apprentices across our six sites working in a range of positions, including operational, administration and support roles. Most of our apprentices are enrolled in Level 3 Apprenticeships (A-Levels equivalent) which last for two to three years. We have a few others completing higher and degree level apprenticeships, so there is an opportunity for everyone.”

It’s not all work and no play for the apprentices either, as IPL has a schedule of activities and events throughout the year to engage and integrate the apprentices into the company environment. The picture above shows a recent activity weekend, an annual event of teambuilding activities and challenges, which is a highlight in the calendar. IPL also host an internal yearly awards ceremony to reward the work of its most impressive apprentices.

The success of IPL’s apprenticeship programme has been recognised on a national scale, with three apprentices winning national awards during 2021. One example is George O’Reilly (pictured, right), who won ‘Apprentice of the Year 2021’ at October’s British Coatings Federation Awards (BCF). Another IPL employee, Cameron Starkey, was a runner-up in the ‘Young Leader of the Year’ award at the same awards evening. Cameron is another whose career began with an apprenticeship.

Cameron Starkey started at IPL’s Rotherham site (formerly MGB/Straight) in 2015 on a three-year engineering apprenticeship programme. Seven years later, Cameron has progressed within the group and now holds the position of Production Manager at IPL Tamworth’s site, where he is making positive impressions on colleagues and customers alike, as his nomination in the ‘Young Leader’ award category demonstrates.

Cameron is a great role model for IPL’s current cohort of apprentices. His example shows that an apprenticeship lays a solid foundation for a career in the industry, with progression and opportunities available for those willing to work hard and make a difference. Cameron is not the only example of a successful apprentice within the group. Many of IPL’s current employees have started their careers with an apprenticeship, including a number who now work in supervisory or leadership positions.

This demonstrates that starting an apprenticeship isn’t just a job. It’s the start of a career.

Lily Cockerill, IPL’s Bids & Marketing Manager, is another driving force behind IPL’s apprenticeship programme. Lily adds: “IPL is very well placed to provide an excellent platform for apprentices to learn new skills and get some real ‘on the job’ training.

“Our company is full of experienced engineers and leaders, who are keen to pass their skills and knowledge on to the next generation of talent. We recognise this is the best way to create and nourish skills for the future of our business and the wider industry, which is why we’re supporting NAW2022.”

For sectors such as engineering and other STEM career paths, the talk of skills gaps or a lack of new young talent entering the industry is a genuine concern for the future. This means that apprentices with the right attitude, gaining skills in these sectors, will go on to have careers in which they will be in high demand and will have many opportunities for growth as their career develops.

Lily continues: “We also have well-established contacts with UK training providers and colleges across the country, so starting your apprenticeship journey with IPL is really straightforward!”

IPL has apprenticeship places available across a full range of operational and administration roles at its sites in Rotherham, Hull, Castleford, Tamworth, Wolverhampton and Haydock. If you’re interested or know somebody who could be, get in touch with Steve Goodland and enquire directly via email.

Throughout the week, IPL has a schedule of events planned to shine a light on the significant contribution that apprentices make to the industry and promote apprenticeships to the next generation. Read the highlights below:

IPL announces its participation in NAW2022 with marketing activity, announcements and social media updates to spread the word.

On Tuesday, a member of the IPL leadership team will participate in a Q&A session, with questions asked by apprentices and by followers of the apprentice programme.

It is the turn of the apprentices on Wednesday, as we find out about their experiences and the benefits the apprenticeship programme brings to them. We also discuss their ambitions for the future and how we can turn these ambitions into reality.

‘Thank You Thursday’ is an opportunity for us to thank all the people who have supported the apprentices on their journey. This includes managers, trainers, mentors, teachers and colleges, who all play a vital role in the success of the programme.

A Friday afternoon celebration is planned at each site, with all teams within the group connecting via a video call to wrap up the proceedings together in style.

If you’d like to take part in this year’s National Apprenticeship Week, keep an eye out across social media for the #NAW2022 hashtag, follow @Apprenticeships on Twitter, LinkedIn or Instagram, and visit the NAW Website for your own toolkit to take part yourself.

If you’d like to know more about apprenticeships at IPL, get in touch with Steve Goodland and enquire directly via email.