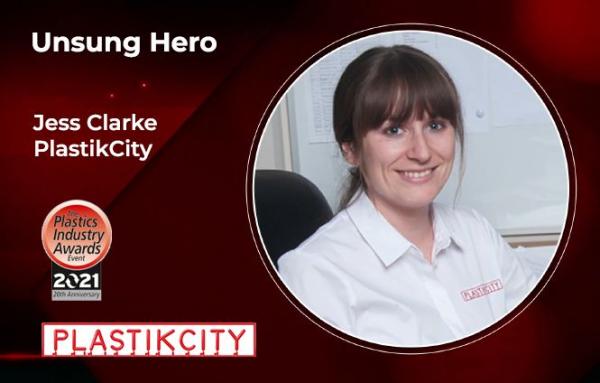 PlastikCity is delighted to announce that Jess Clarke has been selected as a finalist in the prestigious Plastics Industry Awards 2021 in the ‘Unsung Hero’ category. Winners will be announced at a live awards ceremony in London on 2nd December.

Now in its 20th year, the Plastics Industry Awards is the primary forum for recognising and rewarding excellence in the industry and is dedicated to rewarding innovation and exceptional performance. This year’s ceremony will be a hybrid event, with a two-day virtual conference and networking before the live awards ceremony at London’s Hilton Waldorf on the evening of 2nd December.

The Unsung Hero category aims to recognise a staff member who goes out of their way for the business and someone who deserves greater acknowledgement for their efforts that go above and beyond the norm.

Jess started working for PlastikCity while in the final year of her law degree, and was appointed as PlastikCity’s first employee in 2012. As the company has grown over the last nine years, so have the roles and responsibilities Jess undertakes. Now in the role of ‘Digital Operations Manager,’ there is no activity in the company that doesn’t require Jess’ involvement; her professionalism, commitment and attention to detail make her an invaluable member of the team.

This year, Jess studied for a Professional Diploma in Digital Marketing from the IDM (Institute of Data and Marketing), which she undertook in her own time. This diploma was a taxing two-year course for which Jess achieved a distinction in July of this year. Her studying came at a busy time both personally and professionally, as PlastikCity and PlastikMedia adapted to distanced working due to the pandemic, as well as Jess moving house during this period. (Talk about timing!)

Despite still being in her twenties, Jess is an integral part of the PlastikCity management team and is the go-to person for most queries, both internal and external! Despite working hard behind the scenes and not directly in the public eye, we believe the digital products she creates and distributes are a fundamental reason behind the success of both PlastikCity and PlastikMedia.

Whatever happens at the awards ceremony in December, Jess will always be our Unsung Hero!