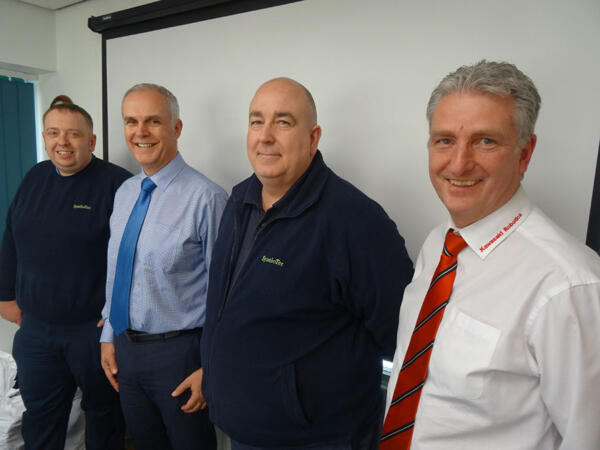 Warrington based Kawasaki Robotics has won the prestigious Supplier Partnership – Ancillary Machinery Award at the 2019 Plastics Industry Awards which were held at The Hilton Hotel,  London, on Friday 27th September.

Presented by former EastEnders actor Shaun Williamson, the Award reflected the partnership which Kawasaki Robotics and leading plastics moulder SythoTec Ltd enjoyed as the latter set about upgrading parts of its production process.

Located in Malvern, Worcestershire, SynthoTec is one of Europe’s premier producers of injection-moulded ultra-high precision components. The company has recently installed a Kawasaki RS20N robot, which has allowed it to boost production, cut costs and achieve a significant reduction in waste material in one of its most important manufacturing processes.

Already a heavy investor in state-of-the-art mould tooling, software and moulding machinery, the SynthoTec management team, led by Managing Director Graham Ward, actioned a desire to further automate and install a new robot in the company’s bearing cage demoulding cells. “We targeted a new robot as we wanted to move the production cell forward to a new concept, and a 6-axis robot enabled us to greatly simplify the cell,” says Graham.

SynthoTec Project Engineer Jon Hart continued: “We had a detailed list of objectives which we shared with Kawasaki Robotics early on. We needed to achieve significant cost savings across our demoulding cells from improved throughput. We also wanted to reduce the physical size of each production cell, because floor space is at a premium, and we needed a robot that was straightforward to install, programme and manage ourselves. Additionally, we had a desire to do our training and systems integration on the new robot: to evolve our way of doing things. And we wanted a robot supplier that recognised our existing in-house skills, was prepared to brief us accordingly, and then let us get on with the job of installing, commissioning and using the chosen equipment ourselves.”

From Kawasaki Robotics’ viewpoint, the detailed brief from its customer led to the selection of the company’s RS-20N robot, in standard form. It offered the required high speed in every axis, could demonstrate repeatable accuracy to within +/-0.04mm across each axis for the lifetime of the robot and could also be stopped instantly, should it be required, this being of importance to SynthoTec for operational reasons. Despite the long reach of the Kawasaki RS20N, the compact overall dimensions of the complete unit allowed SynthoTec to meet a primary design brief of reducing the overall width of each of the demoulding cells on the shop floor by at least 1m per enclosure.

SynthoTec’s Operations Director Wayne Williamson continues: “Our list of critical criteria that ended in the selection of Kawasaki Robotics as our chosen partner was very specific. Key elements included a guaranteed reduction in cycle times for the process, competitive pricing that included a full support programme with no hidden costs, being able to reduce the physical size of each cell and being able to load/unload completed pallets without stopping the production cycle. An additional advantage was the provision of all necessary initial and ongoing training for our project staff at no extra cost. We are extremely pleased that we chose Kawasaki Robotics for another reason, too – we have been dealing with engineers who listen, understand what we’re saying and what we want to achieve, and are always available to us on demand when we have queries or questions.”

Kawasaki Robotics Sales Manager Ian Hensman, a 27-year veteran of the applied robotics business, concludes: “SynthoTec were clear from the start about both their application objectives and their desire to manage the project to completion themselves. It was immediately obvious to us that we could be completely confident in their ability to commission and install one of our robots, with our team simply providing the equipment, together with oversight and detailed infill, as and when required. It is unusual for a customer to want to do this themselves, as our many integrators will confirm. We were delighted that the SynthoTec engineering team proved to be more than capable of fully integrating our robot into their production processes, with minimal requests to us for clarification and guidance. Between us, we took this project from ‘first-meeting’ to ‘up and running’ in just 25 weeks. Kawasaki Robotics is delighted to have received this Supplier Partnership Award because it typifies so many of the applications we work on with our customers. We see this Award as a credit to the team at SynthoTec as much as we do to ourselves”.