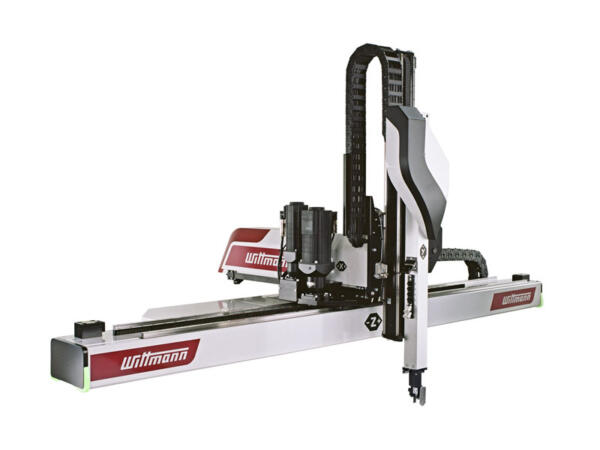 WITTMANN has been known worldwide for decades as a maker of high-quality robots, and at the K 2019, WITTMANN presented a new series for the first time: the SONIC robots.

To meet the more and more stringent demands from customers and simplify the choice, WITTMANN developed the PRIMUS series two years ago. PRIMUS robots are typically used for pick-&-place applications. At the K 2019, the SONIC robots were presented for the first time.

In contrast to the introduction of the PRIMUS series, WITTMANN is now rolling out the SONIC series with several types of appliances all at once. The models currently available are SONIC 131, SONIC 142 and SONIC 143. These robots cover a clamping force range from 150 to 500 t. The new SONIC robots are based on the well-known UHS appliances (UHS = Ultra High Speed), which WITTMANN has been producing for more than 20 years. Parts removals with a total robot cycle time of fewer than 8 seconds are known as ultra-high-speed removals. The SONIC series can be used for parts removals down to 4 seconds robot cycle time. But short-cycle applications are only one of many possible uses since applications which require longer production times can also benefit from these highly dynamic appliances. Gripping times below 1 second contribute to significantly improving the productivity of such production cells, too.

Consequently, users can benefit from a number of additional advantages. For safe parts removal, the mould closing process is only released if all parts have remained inside the gripper. Compared to free-falling parts production, this method involves only a minimal lengthening of the cycle time. Further benefits for users are also improved surface quality, and the possibility to have the parts deposited in the form of stacks, each containing an equal number of parts, which simplifies subsequent handling and packaging.

The appliances currently available cover a load capacity range from 3 to 7 kg. To prevent – in line with the typical slender gripper design for such applications – any additional interfering contours from entering the mould area, the entire electric and pneumatic power supply for the gripper is located inside the vertical axis in SONIC robots. As is customary in other WITTMANN robots, too, the gripper valves and inlets are seated directly on the vertical axis to ensure short response times. The SONIC robots are available with the following strokes as standard:

Axis configurations beyond these ranges are available upon request. This series owes its extraordinary dynamism to acceleration rates of 65 m/s². (These rates exceed those of the currently fastest roller-coaster worldwide, the Formula Rossa, whose passengers are exposed to acceleration pressures of up to 4.8 g.)

At the K 2019, the new SONIC robot series was shown with two appliances. At the booth of WITTMANN BATTENFELD, a SONIC 143 handled the 48-fold removal of medical plastic parts (blood vials). At the WITTMANN booth, a SONIC 142 tandem robot was shown: two robots on one Z carrier axis demonstrated ultimate precision with extremely dynamic movements.

The SONIC series from WITTMANN is immediately available from now on.