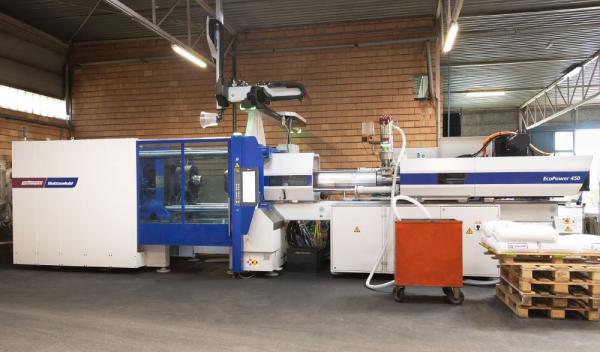 Austrian manufacturer Teko-plastic recently installed an EcoPower moulding machine from Wittmann, due to its focus on sustainability and energy efficiency. The company is already benefiting from energy savings and plans to invest in further machinery in the future to maximise this benefit.

More than 80% of the company’s sales are realised with its own products, such as bowls, household and kitchen aids, baskets, tubs, boxes, buckets, canisters, fresh food boxes and much more. Just under 20% are contributed by job order production for Austrian industrial customers. Apart from its main markets in Austria and Germany, Teko-plastic also supplies its products to customers in Switzerland, the Netherlands, Belgium, Slovenia, the Czech Republic, Sweden and France.

To make its products, the company with a workforce of 48 employees uses 12 BATTENFELD injection moulding machines ranging from 1,000 to 8,000 kN in clamping force. The raw materials used are polypropylene and polyethylene, with 25% of the materials processed consisting of regrind. The latter is mostly purchased in Austria and Germany, but sprue and faulty parts are also recycled in-house and mixed in with virgin materials.

However, Theo Koblischek’s ecological commitment goes far beyond just using recycled materials in production. Investments are also being made into improving the company’s energy balance, with moves such as energy recovery from waste heat utilisation and the use of solar energy. Currently, 6,000 m² of roof area is being covered with solar cells designed for a total annual output of 850,000 kWh. Teko-plastic expects to use 550,000 kWh of this for its own energy requirements, the rest will be fed into the public electricity network.

With energy costs making up an increasing share of the total production costs, it was natural for Theo Koblischek to take a closer look at the injection moulding machines, too. “The energy costs have more or less doubled over the last year”, says Theo Koblischek, “so the issue of energy efficiency is now highly relevant for us.”

In February this year, a machine from the all-electric EcoPower series with 4,500 kN clamping force was installed at Teko-plastic (pictured, above). The machines of the EcoPower series stand out by their extremely high level of energy efficiency, due on the one hand to the use of ultra-modern servo motors and on the other hand to the machine’s KERS (Kinetic Energy Recovery System) technology.

Theo Koblischek wanted to evaluate as precisely as possible the ultimate benefit gained from using state-of-the-art WITTMAN BATTENFELD technology, so he carried out the relevant energy consumption measurements on the new EcoPower 450 equipped with an 85 mm screw. He subsequently compared the measurement results with those achieved with a BATTENFELD TM 4500 injection moulding machine installed in 2001 and fitted with a 100 mm screw. On both machines, a bucket with a volume of 10 litres was produced. The difference between the two machines’ energy consumption rates turned out to be enormous.

Theo Koblischek comments: “Our measurements have shown that by comparison with the TM, an output of 115% has been made possible with an energy input of only 35%. If both machines were equipped with screws of the same diameter, the difference in energy requirements for both machines in favour of the EcoPower would be even greater. Moreover, the EcoPower’s water consumption is also considerably lower.”

Theo Koblischek has now measured the electricity consumption of all machines previously used on the company’s production floor and compared the readings to the consumption data of comparable new machines from WITTMANN BATTENFELD. The option of replacing all machines with up to 4,500 kN clamping force with all-electric machines opens up an enormous savings potential of more than 60% for these machine sizes. But for larger machines, too, energy savings of around 40 % can still be achieved.

Theo Koblischek concludes: “If the electricity price remains at the current level, an exchange of our total range of machinery could be fully amortised within 10 years. Due to the particularly high savings potential for the smaller high-speed machines, we will replace these with new machines first.”

Concerning the installation of the EcoPower 450 delivered in February 2022, Theo Koblischek further remarks, that in addition to the machine itself, he also has come to greatly appreciate the customer support provided by the WITTMANN BATTENFELD service team.