The War on Plastic – Folding Forks 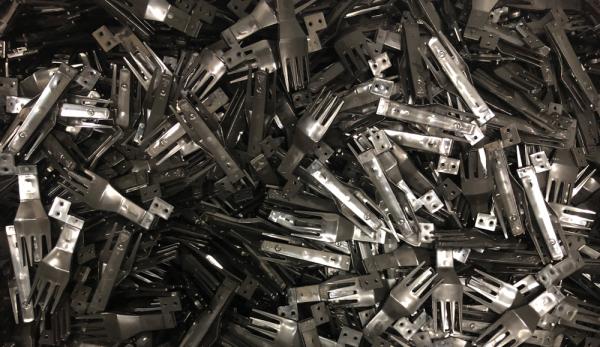 As the fallout continues from the BBC’s ‘War on Plastic’ series, brands are making big decisions on sustainability, but are they the right ones for the environment? In this article, Stephen Rundle of Plastech Moulding explains the decision of a major supermarket to swap his UK-produced plastic forks for wooden cutlery manufactured in China.

Norfolk-based Plastech Moulding was established in 2017 to provide a solution for the high-volume manufacture of foldable forks for leading retailers that previously sourced these items from Asia.

The cutlery products are manufactured using state-of-the-art machinery and equipment, using multi-cavity moulds in the latest fully electric injection moulding machines with fast cycle times and a high-speed robotic takeout. Coupled with automated closing and packaging, this was an energy-efficient and cost-efficient process, allowing Plastech to operate ‘lights out’ manufacturing periods where minimal labour is required.

The foldable forks are the mainstay of Plastech Moulding’s production and are manufactured in large quantities, with around 50 million pieces per year rolling off the production line. Various forks, sporks and spoons are available in PP, PS, and various bio-based and compostable materials and can be wrapped in OPP Films or FSC approved papers.

“Previously manufactured in China and Vietnam, we won this business in 2017, proving that with the right investment, UK manufacturers could deliver a quality product at a competitive price versus cheaper economies in Asia. There was also a huge environmental benefit from manufacturing locally.”

However, this arrangement changed overnight after Plastech received news that a major UK supermarket, the final customer for the foldable fork product lines, was to de-list the forks and replace them with a wooden alternative sourced from China. Plastech was told to halt production with immediate effect, with no prior warning, and with the ‘War on Plastics’ cited as the reason behind the retailer’s switch from plastic to wood.

The question we’re asking now – is this change the right one for the environment? Or is the so-called ‘War on Plastics’ demonising a ubiquitous and indispensable material for the wrong reasons?

Since the BBC aired its ‘War on Plastics’ series back in 2019, public opinion has swelled against our industry. Plastic has become a dirty word to many, and ‘plastic-free’ seems to be becoming a goal that many major worldwide brands are working towards.

The programming drew criticism at the time for presenting a one-sided and overly simplistic view of the situation around household plastic, using emotive arguments against the use of plastic, with no counter-arguments presented throughout. Some data presented was also found to be misleading and was later rebutted in a response by the BPF.

The British Plastics Federation (BPF) commented: “Programmes like War on Plastic are rightly encouraging people to think about how everyday decisions can make a difference”, however, it says “calling a programme ‘War on Plastic’ does not suggest a balanced evaluation of a complex situation and seems to suggest that the material should be condemned in all applications.”

It is important to note that sustainability and responsible plastic use, reuse, and recycling are essential topics that should not be ignored. Greater awareness around plastic waste and protecting the planet is a good thing for all. However, it is also essential that we meet these challenges in the correct way.

Responses must be measured, scientific, and follow evidence-based methodology, rather than knee-jerk responses to emotive arguments or brands simply wishing to give the consumer what they want through perceived demand for ‘plastic-free’ – rather than what is least harmful environmentally in reality.

“In a large number of cases plastic packaging products have reduced the carbon footprint and have therefore reduced the environmental impact versus the alternatives, by light-weighting, extending shelf life and reducing waste.”

“Every reasonable effort has been made to reduce the environmental impact of our plastic forks. They are manufactured in various materials, including bio-based plastics, and remain fully and widely recyclable. Our production is efficient and based in the UK, reducing the need for a global supply chain and the environmental impacts associated with it.

“Our client’s decision has been brought about by the so-called ‘War on Plastics’ but is this really a good thing for the environment? Despite wooden cutlery being a functionally inferior product to plastic for a number of reasons, the product in most cases is unwrapped and has to be shipped from the other side of the world.”

The alternative Chinese-sourced wooden cutlery remains single-use, the same as the plastic alternative, and the recycling options remain the same. The items are both widely recycled, although issues do exist around small products such as cutlery leaking from the recycling chain. Of course, this is an important issue and one that needs to be addressed as an industry, but the issue remains identical if the fork is made from wood or plastic in this case.

So, is the wooden alternative indeed a better choice for the environment? If this is at all in doubt, it is evidence that the ‘War on Plastic’ is unfairly damaging our industry.

Writing in 2020, as part of his response to the BPF statement and the BBCs programming, Director of Plastic-IT, Graham Webster commented the following:

“If our industry becomes weakened as the consequence of poor journalism, it will be a crime. How many jobs and businesses have already been lost because of the misguided ruling on single-use bags? Today plastic drinking straws, stirrers and plastic-bodied cotton buds have been banned by the UK government. All of these plastic items have been replaced by alternatives, each of which will cost the consumer more – but worse still, the alternatives will cost the planet more.”

Unfortunately, Graham’s words last year are ringing truer today than ever before. The choice for a major supermarket to replace plastic with wood has damaged a UK manufacturer, and the decision appears to be a misinformed one. If Plastech cannot find an alternative avenue for its cutlery or other products to manufacture in their place, then job losses could be expected within the company.

The UK government has now picked up the ludicrously biased title of the BBC’s programming and is using it in its policy messaging. Quoting a BBC article from August 2021: “The government has announced plans to ban single-use plastic cutlery, plates and polystyrene cups in England as part of what it calls a ‘war on plastic.’”

Such provocative language used now not only by the media but the UK Government too, does nothing but damage a major UK industry.

While I might once have commented on the irony of these reports, typed from a plastic keyboard on a plastic computer, whilst sat on a plastic chair, after commuting in your (partly) plastic car, the time for wise remarks feels past. Such positioning directly threatens jobs and livelihoods, and the plastics industry feels desperate for a fair and balanced representation.

“This decision to remove the plastic fork may seem insignificant, but it is decisions like this are designed to catch headlines but make no real impact on our environmental goals. They are costing people their jobs and only distract us from the changes needed to be made to see a real difference.

“Plastic used correctly, recycled properly and valued highly, is a fantastic material which will help us achieve our environmental objectives.”

The ‘War on Plastic’ is a hot topic within the industry itself, and in response to Stephen’s predicament, various industry figures added their thoughts to the discussion. Some highlights are shown below:

Chris DeArmitt, PhD, FRSC, FIMMM – “Such decisions harm the environment. They drive people to use other materials proven to be more harmful. People making bad decisions like this should do their homework. Want to ban single-use cutlery? That might be green but banning only the greenest material option is not wise.”

Dr Kylash Makenji, C.Eng – “I would much rather have a proper plastic fork and change people’s behaviours and awareness towards reuse. These sorts of initiatives only strengthen my opinion that plastic can be very detrimental to the environment and society in general, as single-use plastics = BAD.”

Jaime A. Gomez, PhD – “The war on plastics is wielded, in most cases, by people with no or wrong data. Populism is easy and free, and that’s what plastic’s enemies use to sell their point of view. Unfortunately, they shy away from hard data and the truth about the environmental impact of plastics. Plastic is not the enemy; people with bad habits are!”

Sam Hill, PhD, MRSC, Head of Technical Innovation, Bright Green Plastics – “It is a shame to see a resource and energy-efficient item being replaced for the complete opposite. This fork will likely get “missed” in a recycling stream due to its small size, as would the alternative. Both items are also single-use – the idea that wood, when littered will degrade eventually. As such, we will now be forced to use environmentally worse options in an attempt to appear “green.”

Mark Guyett, Director, Mouldshop – “Our focus should be on improving recycling and reuse and even on education surrounding these subjects and not simply changing materials.  As a consequence, we are introducing different environmental issues. The general public is being greenwashed with biased reporting and knee jerk reactions from governments and legislators.”

Richard Payne, Area Sales Manager (South East), Ultrapolymers – “I know how much effort and thought was put into onshoring this as well as the steps taken to make the products as sustainable as possible. It is arguable whether the alternatives you mention, like wooden cutlery, are not truly any more environmentally friendly than recyclable plastic solutions. The fundamental challenge however is that the perception by the general public is that all plastics are bad even if the alternatives are not always better.  Sadly the driver seems to be the perception of being green rather than the solution being any greener.”

If you’d like to add your opinion on the topic, please head to LinkedIn to continue the discussion, or alternatively email your analysis to news@plastikmedia.co.uk so we can continue our coverage of the issue.