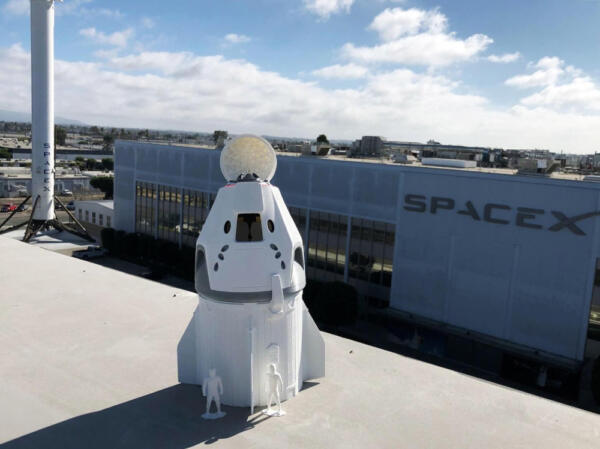 3DGBIRE teamed up with An Duong to produce a number of scale models of SpaceX’s Dragon Spacecraft, delivered just in time to SpaceX’s California HQ to commemorate the safe landing of the most recent crewed mission to the International Space Station.

On 2nd of August 2020, The SpaceX Dragon Capsule carrying Doug Hurley and Bob Behnken splashed down in the Gulf of Mexico just south of Pensacola on Florida’s Gulf Coast. The touchdown marks the first crewed US water landing since the final outing of an Apollo command module 45 years ago.

To commemorate this historical event, 3DGBIRE teamed up with An Duong, founder of More Than 3D and The CREATE Education Project ambassador, to produce a number of scale Crew Dragon Spacecraft models, which arrived just in time to celebrate the successful landing of the capsule with SpaceX engineers at Hawthorne, California, USA.

The 3DGBIRE team assisted in the printing of 20 models using the latest Ultimaker S-Line models, the S5 & S3. The team were able to produce the Capsules using a small farm of Ultimakers printing Ultimaker PLA Black Filament | 2.85mm and BASF Forward AM Ultrafuse PLA White | 2.85mm in just a week!

To ensure each model is produced at the highest quality possible, we optimised printing parameters for each and every part of the model. Some smaller parts take only less than an hour to print and some bigger ones could take up to a day.

The big initiative behind this project for both companies is to get the next generation inspired and involved by space and 3D printing, and also to generate interest beyond this in science, technology, engineering and mathematics (STEM) based careers, which will make up a larger proportion of the job market than ever before in the decades to come.

“I hope this project will not only inspire more children to become astronauts in the future but also pursue STEM careers when they grow up. Thank you Paul Croft and the amazing team at 3DGBIRE for making this project a success!” said An Duong, designer of the scale model, and founder of More Than 3D.

This hypothesis was put to the test and proven correct when An showed off his model to Jack Croft – aged 5 (son of 3DGBIRE Director Paul) who was fascinated by the capsule.

The DRAGON-MS model is the latest in a series of groundbreaking 3D designs by More Than 3D and 3DGBIRE are looking forward to collaborating with them on even more projects in the near future.

The full detail and intricacies of the model are shown in the video below, courtesy of An Duong’s YouTube Channel:

To find out more about the project and how you can 3D Print your own Dragon Capsule visit: https://morethan3d.com/