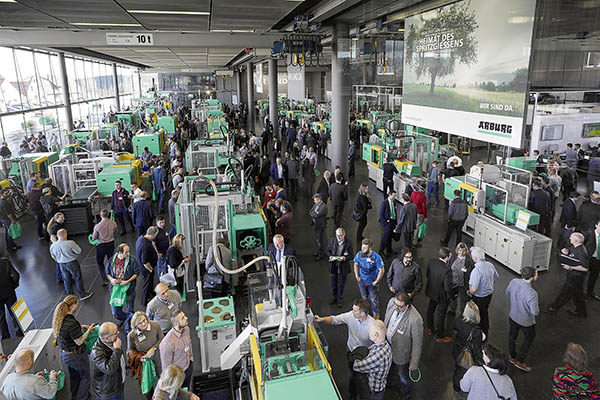 Around 6,300 invited guests from 54 nations visited Lossburg for the Arburg Technology Days, held from 14 to 17 March 2018. Around 660 employees and trainees played an active part in the event. They showed impressive commitment and made the time in Lossburg an unforgettable experience for the visitors.

The full range of machines, applications and processes for the efficient production of plastic parts was on show. Expert presentations, a special show on service, company tours, and above all the Efficiency Arena, which this year was all about “digital transformation”, provided numerous sources of inspiration.

“Our concept has proven its worth, making the Technology Days the world’s largest in-house event for the plastics industry. Overall, between 1999 and 2018, we have welcomed more than 87,500 visitors to our Technology Days in Lossburg,” summarises Michael Hehl, Arburg Managing Partner and Spokesman for the Management Team.

“The share of foreign visitors has steadily increased over the years, reaching 43 percent this year. For every second visitor, this is their first visit to the Technology Days and the first opportunity to get to know our products and services as well as our company “up close and personal”. In 2018, the largest overseas contingents, with around 160 and around 100 participants, came from the USA and China. The largest number of guests from Europe were invited by the subsidiaries in Switzerland (around 200), France (around 185), Poland and the Czech Republic (each around 130) as well as the Netherlands and Austria (each around 100).“

Arburg has long been intensively focussed on the digitalisation of its products and services, aiming to enhance production efficiency even further for our customers. Numerous examples were on view under the slogan “for digitalisation” in the Efficiency Arena 2018. The focus was on six new assistance packages that actively support the machine operator and that are now available for purchase:

Under the slogan “for assistance”, Arburg presented the Arburg host computer system (ALS), as well as the new Gestica control system, including a mobile version and Selogica in the new design (ND) at two additional stations in the Efficiency Arena. 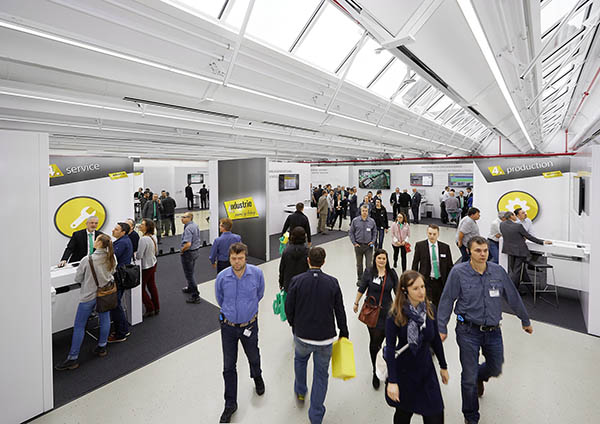 “for connection” was the theme of the Connectivity Café. Here, Arburg experts from Software Development and the Turnkey department were available to provide information on the data exchange between machines, robotic systems, peripheral equipment, moulds and workpieces. In personal conversations, visitors learned more about issues such as the current status of the Euromap interfaces 77 (MES systems), 79 (robotic systems) and 82 (peripheral equipment) or for the synchronisation of machines and robotic systems in turnkey systems.

The “for visions” exhibition area offered a glimpse into the digital future. Also likely to be of interest in the future is the opportunity to work with a “digital twin” – a virtual simulation of a real machine. Under the heading of Augmented Reality (AR), an example was shown of how service can be improved in the future using computer-assisted augmented reality with virtual additional information or objects. In the Virtual Reality (VR) area, visitors were able to gain an insight into the clamping unit of the hybrid Allrounder 1120 H large machine and the production of the famous Arburg folding step stool in an interactive environment that cannot be seen in the real world. This is especially interesting in product development.

At the Technology Days 2018, Arburg demonstrated that the changeover in the design and control of the large Allrounder machines is progressing successively. The hybrid Allrounder 1120 H, which celebrated its world premiere at the K 2016, has now been successfully deployed by the first customers. The new large machine, which with 6,500 kN extends the range of clamping forces by 30 percent, was also awarded the prestigious “iF Design Award” for outstanding design on 9 March 2018. At the Fakuma 2017, a hybrid Allrounder 920 H with a clamping force of 5,000 kN was presented in the new design and with Gestica control system, which has been available for customers to purchase since the Technology Days 2018. A “new look” hybrid Allrounder 820 H with a clamping force of 4,000 kN was on display for the first time. The premiere machine produced 48 screw caps from PP in a cycle time of around 12.7 seconds.

No fewer than five different processes and solutions for lightweight construction were exhibited at the Technology Days 2018:

The hybrid high-performance Allrounder Hidrive machines combine the speed and precision of electric technology with hydraulic power and dynamics. The fact that they are predestined for high-speed applications in the packaging industry was demonstrated by an Allrounder 630 H in the Packaging version, which produced 20 disposable spoons from PS in a cycle time of 6.4 seconds. A hybrid Allrounder 820 H in the new design with the new Gestica control system produced screw caps on a 48-cavity mould in a cycle time of 12.7 seconds.

–  an electric Allrounder 520 A used highly transparent LSR (Shore hardness 70 A) to produce napkin rings in a faceted optical design with crystal look.
–  In the case of an electric Allrounder 470 A, which produced seals for household appliances, the LSR dosing system was integrated in the machine control system via OPC UA.

A total of eight Freeformers produced functional parts from original material in the Arburg Plastic Freeforming (APF) process. An innovative application was presented involving the processing of PMMA and medical-grade SEBS with a hardness of 28 Shore A (Cawiton PR13576). Moreover, closure caps made from standard PP were on view, as well as parts made from PC, PA10, ABS and from two components.

The well-equipped turnkey area had everything, from simple pickers and linear Multilift robotic systems to a six-axis robot featuring the Selogica user interface and customised turnkey systems. The focus in service was on the new Arburg Remote Service (ARS) and preventive maintenance, as well as the current training programme.

Over 1,800 visitors from Germany took the opportunity afforded by the factory tours to become familiar with machine production. Furthermore, the company was also presented to all international groups visiting the Technology Days with their Arburg subsidiaries and trading partners in their respective national languages.