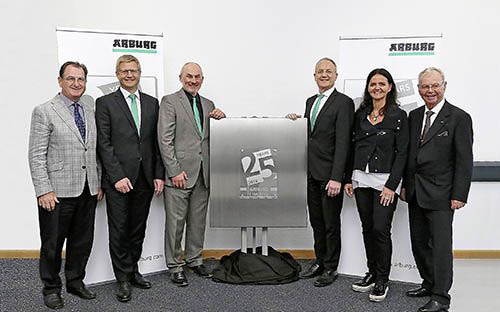 Arburg Ltd. in Warwick celebrates its 25th anniversary in 2018. In order to celebrate this special anniversary in fitting style, the subsidiary organised a two-day event with some 90 guests on 15th and 16th May 2018.

During an exclusive evening event, Arburg Managing Partner Juliane Hehl presented the traditional anniversary sculpture to Colin Tirel, Managing Director of Arburg Ltd. The Open House event afforded customers and partners the opportunity to witness the performance of the machines and the expertise of Arburg for themselves on the basis of exhibits and applications, as well as numerous expert presentations.

In her address, Managing Partner Juliane Hehl referred to the importance of the Arburg “Wir sind da.” brand promise, which expresses the values that Arburg has always stood for. “We are uncompromisingly committed to the interests of our customers and partners worldwide, everywhere and at all times,” explained Juliane Hehl, emphasising that the Arburg team in the UK had been proving this to customers on a daily basis for the last 25 years.

Thanks to both staff and customers

Following a speech full of gratitude and praise, Juliane Hehl presented the anniversary sculpture to Colin Tirel, Managing Director of Arburg Ltd. as a gesture of thanks and recognition for the successful work and as motivation for the future. The high-ranking delegation from the German parent company included not only the real founder of the subsidiary, Eugen Hehl, but also Managing Director Sales Gerhard Böhm and European Director Sales Stephan Doehler. Speaking on behalf of the entire company, Gerhard Böhm thanked the customers from the UK and Ireland for their trusting and successful cooperation over the past decades, before looking back over the successful history of the subsidiary.

Several successful decades in the market

The success story began with the sale of the first Allrounder injection moulding machine to the UK in 1967. Initially, the customers received support via a trading partner. Over the years, however, not only did the overall plastics processing market grow, but also Arburg’s market share. Consequently, 25 years ago, the decision was taken to found a fully owned subsidiary. The transition was seamless, as all employees of the trading partner responsible for Arburg were taken on.

At the time, the subsidiary began with an 18-strong, experienced team headed up by Frank Davis. Much to the delight of Juliane and Eugen Hehl, Frank Davis was present as a surprise guest at the anniversary celebration. One of the milestones was the construction of a dedicated building in Warwick, during the inauguration of which in 1999, a member of the British Royal Family, Her Royal Highness Princess Anne, was in attendance.

Since 2005, Colin Tirel has been at the helm of the subsidiary, continuing its success story. Today, the Arburg team has a total of 26 employees, 17 of whom work in after-sales. In this area, Arburg Ltd. offers its UK and Irish customers a hotline manned by specialists, expert service technicians, application engineering consulting, a showroom with Allrounders for testing customer moulds, a well-stocked spare parts warehouse and a wide range of training courses.

Representation in all industries

In addition to the mostly small to medium-sized companies, each with only a single site in Great Britain or Ireland, the customer portfolio also includes some very large global players with worldwide production operations. These produce parts for the automotive, electronics, packaging and medical technology sectors. The main focus is on the production of thermoplastic parts, but in recent years, the areas of LSR processing and multi-component injection moulding have grown.

One of the trends in the UK and Ireland is towards larger, multi-cavity moulds. Arburg is well positioned to cope with this, thanks to the extension of the clamping force range up to 6,500 kN. An expert is available in the field of automation to advise and support customers, while the use of the Freeformer for industrial additive manufacturing will be further promoted in 2018 with a number of events.

Plastic processing in theory and practice

In order to demonstrate Arburg’s pioneering role in many areas, its comprehensive range of products and services, as well as its extensive expertise, during the evening event, subsidiary manager Colin Tirel provided an overview of the technological innovations at Arburg, as well as the company’s development over the past decades. In addition to this, the agenda for the open house event the next day included the presentation of exhibits and a series of lectures by external and internal experts.

“Our anniversary event was a complete success,” said Colin Tirel. “We welcomed some 90 guests over the two days and were thus able to personally thank many of our customers for their excellent cooperation during the past decades as well as showcasing ideas for future projects based on the exhibits and presentations.”