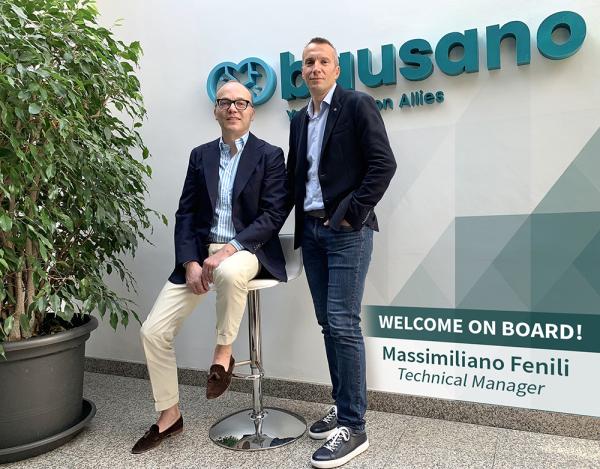 Bausano – international leading player in the design and production of customised extrusion lines for the transformation of plastic materials – instructs Massimiliano Fenili, as Technical Manager in charge of supervising the design of systems for the various application areas: granules, pipes, profiles, WPC, medical sector and for recycling. The appointment of Fenili falls within a broader project in which Bausano has committed to strengthening its own team. The Manager’s high expertise in pipe extrusion technology is aligned with the corporate strategy of being one of the main players in the market for such solutions.

Massimiliano Fenili, what are the application areas in which the use of plastic pipes is increasingly widespread?

“In general, we can say that demand is moving towards more efficient solutions. This is translated into an increase in the demand for polyethylene (PE) pipes, a material that guarantees important benefits in terms of reducing installation times and costs, even up to 50%, thanks to its flexibility, ease of installation and possibility of trenchless installation or without a sand bed. Specifically, PE100 RC is frequently used thanks to its higher mechanical performance, resistance to external abrasions, reduction of the propagation of cracks and resistance to high pressures. To mention two areas in which demand has grown, we may certainly consider the infrastructure sector, for gas pipes, pressurised and non-pressurised water, and the telecommunications sector. The first one searches, most of all, for multilayer pipes capable of carrying out various functions, from resistance to high pressures up to reducing installation costs. On the other hand, in the telecommunications sector the diffusion of optical fibre at a domestic level encouraged the study of new types of piping and installation, from the single microduct to the bundle, fender and round structures.

In addition to the aforementioned polyethylene, multilayer polypropylene (PP) pipes are certainly expanding, which combine maximum flexibility and resistance to several climatic conditions capable of carrying out various functions: from the reduction of noise for the drain pipes, to the ability to resist to very low temperatures. Furthermore, the combination of PVC and polypropylene is often chosen as an alternative aimed at keeping costs down. Alongside PE and PP, there are also PEX, PERT and PB materials, used in the healthcare sector, especially in the multilayer versions with oxygen barrier. While C-PVC, specifically, is already widespread in India and has a very large market in the United States. Finally, reinforced thermoplastic pipes (RTP), ideal for sectors such as Oil & Gas, are products in which strong interest is growing”.

In light of the above, which technological innovations will the expansion of the Bausano tube division focus on?

“First of all, the R&D Area will be engaged in expanding the range of extrusion lines for pipes with a diameter of up to 1200 mm. The main purpose is that of supporting customers in achieving their own goals, by defining the correct setup of machines with the consequent collection of data and the related definition of production KPI. Within this context, digitisation and Industry 4.0 play an essential role. The development of the Orquestra software, a centralised control system which allows continuous and real-time monitoring of performance, even in terms of predictive maintenance, by guaranteeing increasingly high levels of efficiency is an example of how Bausano is responding to these new needs. These levels, in turn, are aligned in terms of sustainability which, in its several forms, plays an increasingly central role, of which Bausano is already a precursor. An example is the Smart Energy System, the induction cylinder heating system, thanks to which it is possible to limit the wear of the machinery and to achieve energy savings of 35%. Furthermore, the company invests on the reduction of production waste: by equipping its extruders with advanced technologies and, on the other hand, by developing extrusion lines capable of regenerating in-house industrial residues or post-consumer household waste”.

What are Bausano’s long-term goals?

“The team I join is heterogeneous, dynamic and characterised by consolidated experiences and transversal skills. An essential aspect in order to ensure strong integration between the various departments and encourage product and process innovation. At the same time, this allows us to offer customers a very high level pre and post sales consultancy. Finally, the Team will be in charge of coordinating R&D activities, in compliance with Bausano’s strategic lines of development and growth in new markets, such as the United States “.