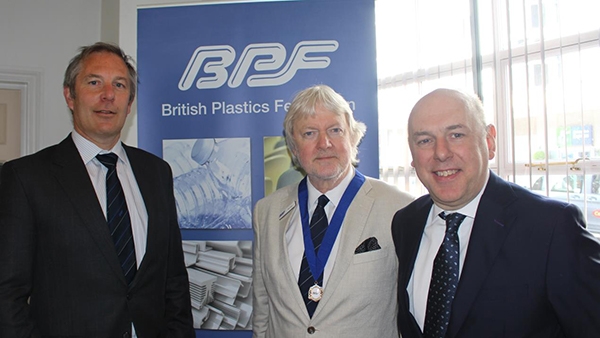 On 17th May the British Plastics Federation (BPF) held its Annual General Meeting, used each year to update the media and the trade association’s members about its performance and activities, as well as to launch its Annual Review.

At the meeting, BPF President Bruce Margetts (of BERICAP) was re-elected for a second term and the Epwin Group’s Martin Althorpe was elected as Vice President. The organisation’s Honorary Treasurer, Paul Jukes, stepped down to retire after five years in post and some fifteen years’ involvement with the BPF in various roles. Wavin’s Brent Nicholls was elected as his replacement.

Margetts and Director General Philip Law stated that skills, Brexit, marine litter and the Grenfell Tower tragedy were the four most significant work streams for the BPF throughout 2017. Twenty-eight new companies joined the BPF, which has witnessed a significant rise in its media coverage, with average mentions per month almost doubling. Similarly, traffic to the organisation’s website has steadily increased as public and media attention on plastics has continued to rise.

The BPF is in good financial health. This is due to the development of compelling membership benefits by our executive team and the prudent management of our finance department. But it also results in no small measure from the invaluable advice of Paul Jukes, our outgoing Honorary Treasurer. With his services to the BPF extending back to 2003, I express my sincere thanks to him for all he has done for us over the years.

I’m sure those newly elected to positions within the BPF Council, Brent Nicholls and Martin Althorpe, will render sterling service to the BPF as both are plastics veterans with a keen understanding of the changing needs of the industry. Congratulations are due to them, as they are to our current President, Bruce Margetts, who, I’m certain, will return an equally distinguished second term in office.

The BPF’s Annual Review 2017 can be viewed and downloaded here.