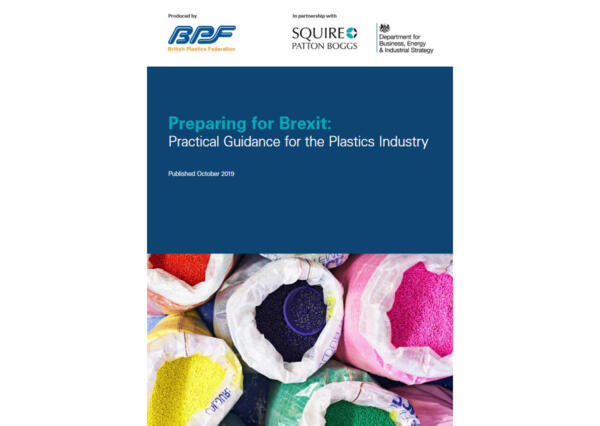 The British Plastics Federation (BPF), in partnership with Squire Patton Boggs and the Department for Business, Energy & Industrial Strategy (BEIS), has released a practical guide to help plastics companies prepare for Brexit.

Preparing for Brexit: Practical Guidance for the Plastics Industry is available to download and aims to ensure that plastics companies in the UK understand the key practical steps to adequately prepare for Brexit. Amongst other topics, the detailed 32-page guide covers:

The document is being released following of a recent survey of BPF members about Brexit, which found 78% of companies have made contingency plans in case of a no-deal Brexit. This is a notable increase since December 2018, when only 54% of companies plans in place.

The EU is the UK plastics industry’s most significant trading partner, accounting for 69% of all trade, with nearly £15 billion worth of plastic and plastic products being traded between the UK and EU member states each year. When asked what they considered the best option was for their business, 4% of respondents wanted a no-deal Brexit, 41% wanted to leave with a deal and 55% wanted to remain in the EU.

Commenting on the release of the report, BPF Director-General Philip Law states:
“Whilst the signs suggest that the majority of firms have taken some steps to prepare for a no-deal Brexit — a result the vast majority of firms clearly want to avoid — we have released this report to provide clear, accessible guidance to ensure all bases are covered when preparing for Brexit and we urge all plastics companies to make use of it.”

Preparing for Brexit can be downloaded at www.bpf.co.uk/eu/prepare

The results of the Brexit survey can be viewed at https://bpf.co.uk/eu/home.aspx