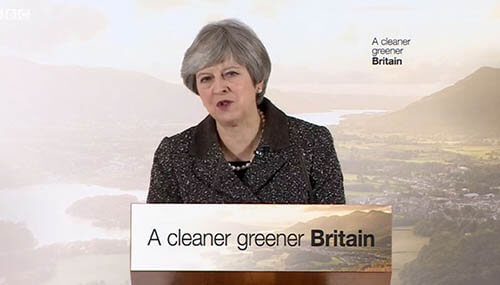 On 11 January 2018, Prime Minister Theresa May pledged to eradicate all of the UK’s avoidable plastic waste by 2042, as part of the government’s 25-year Environment Plan.

“The UK plastics industry shares the objective of minimising plastics waste through maximising recycling. The calls for evidence provide an opportunity to bring about much-needed reform of the regulatory regime currently governing packaging recovery and recycling to nurture a full-blooded domestic recycling culture that is not dependent upon the export of waste for recycling overseas.

“Plastics themselves save energy. They are low carbon materials, crucial in the fight against climate change. Their light weight and durability cuts fuel consumption in vehicles and aircraft and reduces pollution. They provide protection for products and prevent food waste. By encouraging plastic-free aisles, the government is creating an impression that the use of plastics is inherently wrong. Typically, food waste in stores increases by a third without packaging. For example, a wrapped cucumber lasts 14 more days than one that is not. Cutting out plastic packaging for fresh produce will actually harm the environment through increased CO2 emissions because the energy used to produce food is much greater than in the packaging protecting it.

“Plastics should not be in the sea and it is right that the UK, alongside other developed nations, should set an example of best practice. As has been pointed out, the vast quantity of plastics in the seas arrive there from the less developed economies of Asia, which have rudimentary waste management systems. Plastics get into the seas by a number of routes and each route needs to be dealt with separately.

“To stop plastics entering the sea from the West, the plastics industry would like to see a tougher stance on littering. It is highly doubtful that simply providing alternative materials will actually reduce littering in the UK, as this is an issue of personal behaviour. It should be noted that the types of products that enter the marine environment from the UK tend to be those that have been irresponsibly littered — not packaging materials for fresh produce that are typically consumed at home and then disposed of responsibly.

“We look forward to working with government to help the UK progress towards a truly circular economy by helping to reduce littering, significantly increasing recycling infrastructure, ensuring all packaging used for food and drink consumed ‘on the go’ is captured for recycling, encouraging design for recyclability and the use of recycled material in new low carbon products.”