What Could be Sweeter Than Bulldog’s New Sugarcane Packaging? 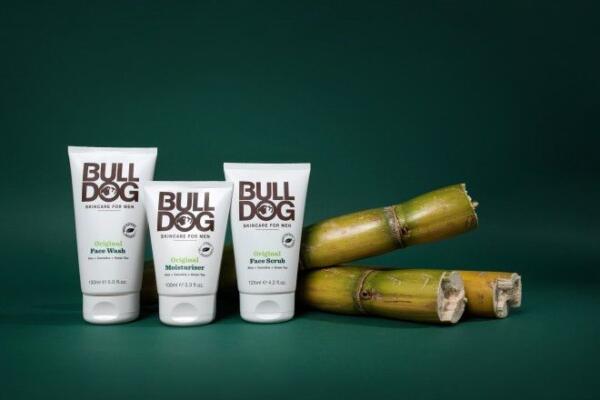 Constantly challenging the male grooming category, Bulldog Skincare For Men is now revolutionising the way it packages its products. The new generation of Bulldog tubes uses plastic derived from Brazilian sugarcane.  This innovative concept makes Bulldog the first men’s skincare brand in the world to use sugarcane as a raw material in packaging.

The skincare industry is a major contributor to the amount of plastic packaging used each year. Most of this packaging is made from fossil fuel petrochemicals. These are non-renewable sources and in the process of conversion to plastic, release carbon dioxide, which contributes to global warming.

Working with Brazilian company Braskem and UK tube manufacturer M&H Plastics, Bulldog has developed these tubes to help reduce its consumption of fossil fuel materials. Bulldog’s new sugarcane plastic tubes come from a renewable resource that is grown responsibly in Brazil with minimum impact on food suppliers or biodiversity and doesn’t need much more than natural rainfall to grow.

On top of it being a renewable source, instead of releasing carbon dioxide, the plastic from sugarcane saves it. For every 100 tonnes of sugarcane plastic used in Bulldog tubes, 309 tonnes of CO2 are taken out of the environment. In fact, through carbon dating – the same technique that’s used in archaeology – it is possible to verify that the carbon atoms captured in Bulldog tubes are younger than those in traditional plastic.

Simon Duffy, “We are extremely excited to bring this important innovation to market. The great thing about sugarcane plastic is that its properties are no different from traditional plastic materials, but its environmental impact is significantly better.”

Further Information on Plastic from Sugarcane

The sugarcane used in Bulldog’s tubes is grown thousands of kilometres from the Amazon rainforest, typically on degraded pasture land which in turn helps to recover the soil for future use as general farmland or to simply plant another crop of sugarcane. All the sugarcane used is from certified sources.

Sugarcane plastic is made by extracting ethanol from the sugarcane. This ethanol is then processed into polyethylene. This plastic is fully recyclable.

All of Bulldog’s products containing plastic from sugarcane will display a new logo specifying the amount of sugarcane plastic consumers can expect to find in that pack.

*Bulldog Skincare For Men is a vegan friendly skincare brand and certified Cruelty Free International. From the very first day of launch they have never used artificial colours, synthetic fragrances or ingredients from animal sources.