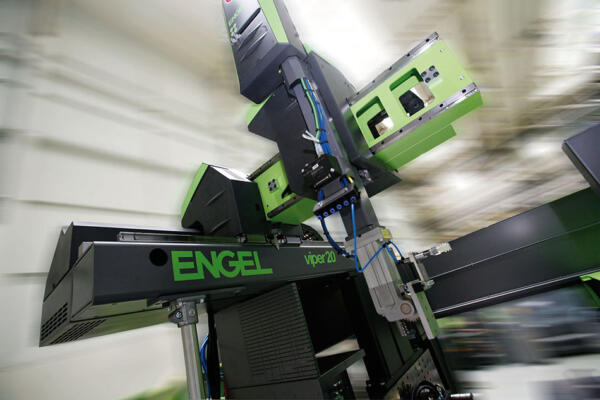 ENGEL is adding to its selection of automation products for the K 2019 trade fair. Three innovative new developments are making their debuts at the show in Düsseldorf, Germany, between October 16th and 23rd.

ENGEL develops custom-built automation solutions, from simple product removal and depositing to highly integrated and networked production processes. A comprehensive range of robots and high levels of special automation expertise are the essential ingredients for combining top quality with efficiency and cost-effectiveness in injection moulding.

ENGEL viper linear robots are appearing at K 2019 with an even larger range. The long design of the robots reaches longer take-off strokes with identical load-bearing capacities and maximum dynamics, with the viper 20 increasing from 900 mm to 1,100 mm, for instance. This allows the viper 20 to fully reach Euro pallets – a task previously requiring a viper 40, even with low load-bearing capacities. The X-stroke extension keeps the handling area compact, reducing capital outlay.

Alongside mechanical upgrades, it was smart inject 4.0 functions that truly made this innovation possible. Two key examples are iQ vibration control, which actively compensates for vibrations, and multidynamic, which determines the load condition with a high degree of precision and makes full use of this based on the robot’s kinematics. Both software solutions are included as standard with the viper linear robots.

From the K 2019 show onwards, the X-stroke extension will be an option for viper linear robots in sizes 12 to 60.

The ENGEL pic A is the new pneumatic sprue picker that is set to break two records at once. It is both the longest-lasting and most compact sprue picker on the market. Instead of the classic, rigid X-axis, the pic A is the first product in this segment featuring a swivel arm, which operates within an incredibly tight area. The take-off stroke is continuously variable up to 400 mm thanks to the new kinematics. Another new development is the ability to adjust the Y-axis module in just a few steps. The A-axis’ rotation angle automatically and flexibly adapts to the relevant requirements between 0 and 90°.

Its ease of operation is another plus-point – when fully swivelled in, the pic A leaves the entire mould area free, allowing for simple and speedy mould changes. The time-consuming process of swivelling out the sprue picker and setting the XY adjustment unit is history.

Like all other ENGEL robots’ control units, the pic A control unit is integrated into the CC300 control unit of the injection moulding machine. As a result, the entire process can be centrally controlled.

In addition, as a pneumatic sprue picker, the pic A meets the strict specifications of the EN ISO 10218 robot standard as a PL “d” product with universal dual-channel design.

Integrating robots, peripheral systems and other processing units is about more than simply creating a compact set-up – it is also important to ensure that the interaction between the components is safety-certified. To meet both goals in a cost-effective manner, ENGEL provides standardised, modular solutions. A new addition is the compact cell, which is appearing in front of professional onlookers for the first time at ENGEL’s trade fair booth with a medical application. In the context of fully automated production of housing parts, the compact cell includes parts handling systems and box changers, as well as still being significantly slimmer than a standard safety guarding. The safety cell, which is easy to increase or decrease in size, also provides enormous flexibility in this area. When the compact cell is opened up, the box changer is automatically moved to the side, allowing open access to the mould in no time with just a single movement of the hand. Aside from the box changer, it can also house other automation units such as a multi-tiered conveyor belt or tray server. The standardised design makes it extremely simple to modify the system, as well as enabling fast product changes, even in controlled cleanroom environments.

Related Post  Ten Reasons to Use Robotics in Manufacturing