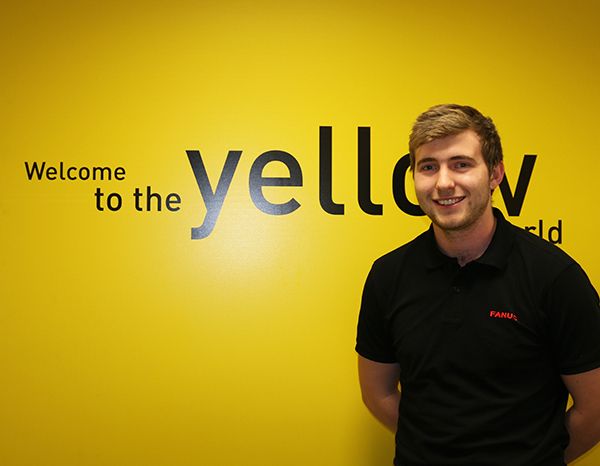 A robotics apprentice from FANUC UK, Christian Attewell, has been shortlisted for Apprentice of the Year (SME employer) at the prestigious Science, Engineering and Manufacturing Technologies Alliance (SEMTA) Skills Awards 2019.

Christian, 22, who has progressed through the Advanced Manufacturing Technology Centre (AMTC) apprenticeship programme, joined FANUC in 2016, and completed his apprenticeship in September 2018.

His nomination stems not only from the breadth and depth of his technical understanding at a young age, but from proving himself time and again in challenging circumstances.

For example, just a couple months into his time with FANUC, Christian was flown in to resolve a resourcing challenge on a large customer project in Ireland. His knowledge and practical experience meant he could fit seamlessly within the team, without the need to call upon local subcontractors; thus saving significant time and money for the project.

Another example of Christian’s diverse skillset – and willingness to adapt to unexpected circumstances – is when he was called upon to deliver a customer training course at short notice, when the original trainer fell ill. The training team were so impressed he was subsequently seconded to deliver the rest of the week’s courses, again avoiding the need to engage additional resource. He now regularly delivers technical presentations to key customers.

Andy Armstrong, UK Sales & Marketing Manager for FANUC, comments: “Christian is a fantastic example of how the cross-collaboration between different industrial partners – in this case, the MTC and FANUC – can produce exceptionally well-rounded engineers that will go on to shape the future of British manufacturing.

“In short, Christian’s commitment, capability and competence has cemented his position as an incredibly valuable member of our robotics application engineering team. He is very much seen by his colleagues as an ‘engineer’ rather than an ‘apprentice’ – and that is the ultimate accolade.”

Christian Attewell, added: “One of the elements I’ve enjoyed the most about my apprenticeship has been the sheer diversity of projects I have been able to turn a hand to. From working on large projects at FANUC’s Coventry HQ and directly on-site with customers, to devising a self-contained automated cell for MACH, as well as running external training sessions for key customers; the opportunities have been invaluable.

“My apprenticeship has also enabled me to put back in to a system that has given me so much, by engaging with pro-apprenticeship lobbying campaigns and acting as a STEM ambassador for the AMTC. Here, I have been able to engage young people from all ages – from primary school through to GCSE and university students – and hopefully inspire more people to consider a career in this fantastic industry.”

Christian concludes: “To be shortlisted for a SEMTA Skills Award is an amazing feeling – I love what I do, and to be recognised for that is fantastic.”