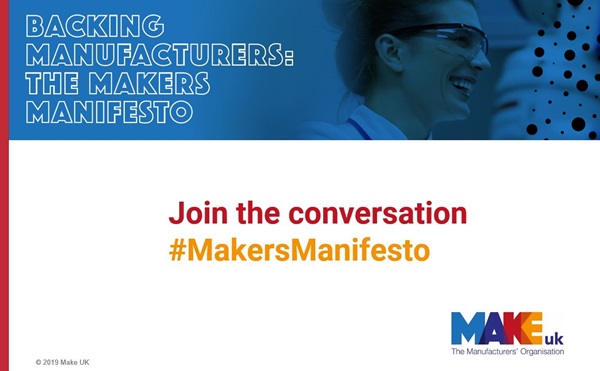 Britain’s manufacturers are urging the leaders of the main political parties to move on from blame-driven politics and demonstrate to the electorate they have real vision and ambition for the UK economy in the next parliament and, the policies to back it up in a post-Brexit world.

The call, made by Make UK, the manufacturers’ organisation in ‘Backing Manufacturers, The Makers Manifesto’, comes ahead of an election in which Brexit will be the number one concern for manufacturers.

As such, Make UK believes the overriding immediate priority for the next Government must be to come to an agreement with the EU which is the basis for a future trading relationship which delivers the four key tests of:

According to Make UK, it is highly unrealistic to assume a trade deal could be negotiated and ratified by December 2020.

Commenting, Make UK Chief Executive, Stephen Phipson, said: “The first and foremost priority for the next Government must be an agreement with the EU that also passes through Parliament as soon as possible, which removes ‘no deal’ and ensures four key outcomes to safeguard the future prospects for manufacturers. This is absolutely essential to avoid leaving without an agreement which would be catastrophic for industry.

“Beyond that, what the public and business want to see is not the narrow-minded, blame-driven politics we have witnessed in the last few years but a grown-up vision of where we are going as a country and, an economy.

“They want to see pledges that will support the creation of the skilled jobs we need, equip their children with the education and skills for the future and anchor value-creating businesses in the UK. In short, they want to hear what the big picture is for very critical issues in a world that is facing rapid technological and social change.

“The last few years have been largely wasted. Beyond the immediacy of a sensible agreement with the EU, we need to move on quickly and ensure Government works with industry to deliver a better-balanced economy and sustained growth. Manufacturing will be central to delivering this and addressing the major societal and technological challenges we face.

“Some important groundwork has been laid through the industrial strategy. It is now vital the next government commits to immediate policies which will ensure the UK remains an attractive place to do business, encourage growth, boost private sector investment and job creation.”

As well as tackling the priority of a future trading relationship with the EU, Make UK has published a top fifteen priority list for the first year of an incoming government. The list sets out the core foundations for boosting investment, supporting growing businesses, improving skills and ensuring the UK remains an attractive place to do business

According to Make UK, the longer-term aim should be to improve productivity and secure real wage growth. In particular, the next government should set an ambition for measurable improvements in productivity relative to our international competitors, a step-change in investment behaviour in the private sector and a marked improvement in the UK’s trade performance.

1.      Fix the failing Apprenticeship Levy to boost the supply of domestic skills

4.      Cut the cost of energy for Energy Intensive Industries

9.      Implement the Made Smarter Review

To download the full Maker’s Manifesto publication, visit the Make UK Website or join the conversation with #MakersManifesto.