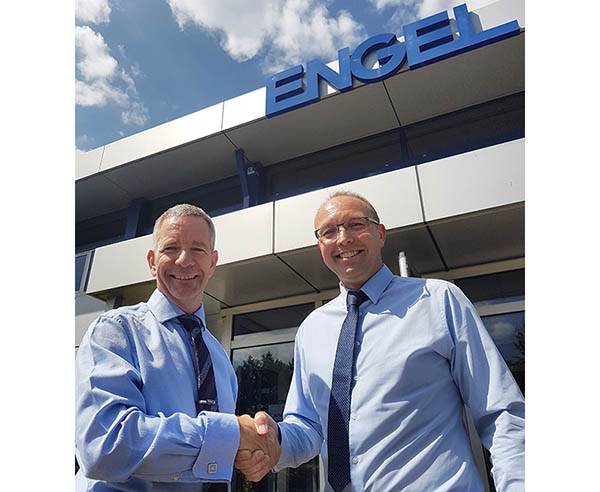 Graeme Herlihy of ENGEL UK has named his successor for the role of Managing Director after he moves on to become Regional President Europe West.

Nigel Baker, a familiar figure in the UK plastics industry since the 1980’s, will take over the position of Managing Director in September.

Awarded a Plastics Industry Award for Ambassador for the plastics industry in 2018, Nigel’s passion for the industry and the esteem in which he is held by his peers is well known.

Almost 25 years at the helm of injection moulding machine manufacturer Netstal UK and over 5 years as Managing Director at BMB Plastics Machinery has made Nigel the ideal choice for this new prestigious role with ENGEL UK.  During his time with BMB he is noted for having significantly increased both their presence and market share in the UK.

Graeme Herlihy says “Nigel’s appetite for understanding his customer’s needs is exceptional. We all know him to be an unstinting and diligent Managing Director for whom customers always come ﬁrst and I am totally happy to be handing over the keys to the kingdom.”

Nigel is also an active committee member of the PMMDA (Polymer Machinery Manufacturers and Distributors Association), well-established association that provides important information, representation and a mutual support for companies in the plastics industry.

Speaking of his new appointment, Nigel comments “I am very excited by the opportunity to work with ENGEL UK. Graeme is leaving me a well-oiled machine comprising a team of highly professional technical engineers, sales engineers and office based staff. The tremendous support provided by ENGEL Austria is known as being second to none and the two teams together will, I am sure, move forward with strength. I fully intend to build on the good work Graeme has done and look forward to the challenge.”

Although moving to his new role, which will involve a significant amount of travel, Graeme Herlihy will retain an office at ENGEL UK in Warwick and will remain a familiar figure within the industry.