Winner of the 2018 Polymer Apprentice of the Year Award Announced 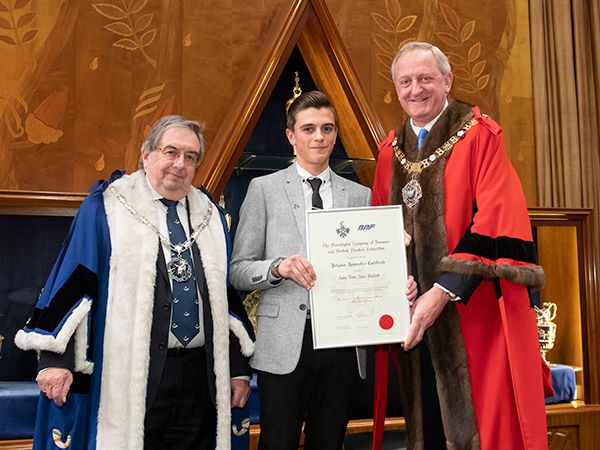 The winner of the Worshipful Company of Horners and BPF 2018 Polymer Apprentice of the Year Award has been announced as Jake Hallatt of Gripple Ltd, who undertook a Science Manufacturing Technician Level 3 Diploma in Polymer Processing Operations. The award’s runner up was Tom Ward of Amaray and the highly commended went to James Lawrence of Luxus.

Each year the judges find awarding the winner harder and harder, with the calibre of 2018 entrants again exceeding expectations. The winner, Jake Hallatt, demonstrated a high level of achievement in his apprenticeship as well as within projects in the workplace that showed his competency. Furthermore, his sports qualifications outside of work and his joining of an in-house employee committee only further added to his impressive approach to work and life. Jake subsequently attended the Livery Companies Skills Council Award Ceremony in March 2019 to receive his Polymer Apprentice Certificate, ceremonial drinking horn and £500 cash prize.

There is certainly a lot to say about the runner up and highly commended. Tom Ward, who also received a Polymer Apprentice Certificate and a £200 cash prize, completed his engineering apprenticeship at Amaray and again impressed the judges with his maturity and commitment to the job. Highly commended James Lawrence completed his Science Manufacturing Technician Level 3 Diploma in Polymer Processing Operations at Luxus; he was lauded for his commitment to detail and eagerness to work.

Now the third iteration of the BPF and Horners’ partnership, the entrants into the award continue to showcase and highlight the talent coming through in the industry.

For further information on the Polymer Apprentice of the Award, contact Matt Davies at mdavies@bpf.co.uk.