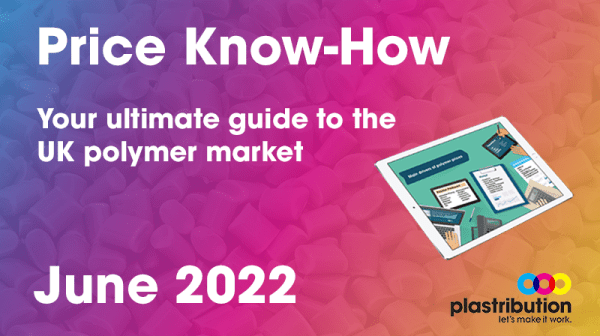 The record petrol & diesel retail prices in the UK are a consequence of the constrained supply of refined products from Russia. The resulting shortfall has meant that European crude oil refiners are enjoying enhanced margins, with demand outstripping supply and petrol & diesel prices inflating more rapidly than crude oil prices.

The strong economics of refining in Europe has the consequence of high refinery operating rates, not only when producing transport fuels, but also for bi-products used in other petrochemicals. Whilst much of the additional Naphtha output will substitute missing Russian origin production, the petroleum refining operation involves the use of FCCs (Fluidized Catalytic Crackers) from which C3 (propylene) is a significant output. This goes some way to explain the rollover for C2 (ethylene) contract prices and the reduction in C3 contract prices.

The following graph depicts the opening up of the C3 versus C2 spot to contract delta. 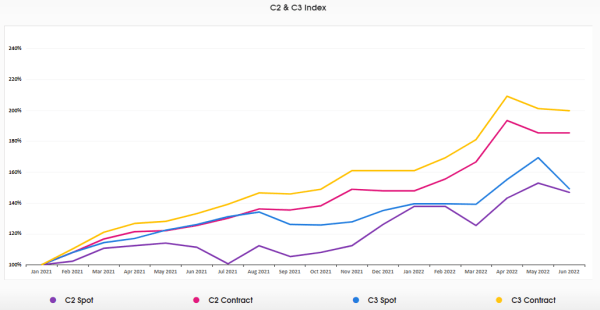 PE and in particular PP producers are faced with the challenge of balancing increased feedstock availability at discounted prices with a polymer market that appears to be trending towards surplus. The immediate consequence is some softening in PE and PP prices, although producers will be working hard to restore a more favourable balance in the market.

Whilst Europe does not quite have the same ‘motoring season’ that affects transport fuel demand in the US, demand for fuel does still tend to increase in the summer months. At a time when polymer demand normally falls as converters shut down for seasonal holidays, this may lead to further downward pressure. The coming few months are likely to be interesting.

In the case of Styrenic Polymers and Engineering polymers, increases in crude oil, energy, benzene and to a lesser extent SM (styrene monomer) costs will put prices under further inflationary pressure.

Prices in June dropped with some reasonable decreases, despite monomers staying relatively flat.

With weak downstream user demand, propylene (C3) dropped by €10 / MT and ethylene (C2) rolled over. However, with poor demand for all polyolefins, most producers and traders offered reductions to stimulate demand and move stocks. As imports into Europe start to return (though logistics issues remain), local producers are under increasing pressure to compete. Polypropylene probably saw the biggest falls with prices now back to where they were before the Ukraine invasion. Polyethylene is not far behind, but prices are dropping slightly slower on some PE grades as uncertainty on some imports remains.

Demand continues to be weak, but it is hoped that these price decreases will encourage a return to “normal” levels of stock-holding, rather than the “hand-to-mouth” purchases that we have seen with recent high prices. However, significant economic headwinds are affecting the UK economy, with a recorded contraction of 0.3% in April.

Whilst June’s order intake is stronger, we are likely to be in an oversupply situation for a few months as supply from outside Europe is slowly recovering. Shipping from the USA to Europe is now relatively low cost, but congestion at US ports remains, as do general issues in getting goods to ports. We have seen spikes in supply with nothing for months and then large quantities arriving. COVID outbreaks in China are still happening and have the potential to still upset fragile supply chains.

Prices are likely to slip further, but with the delta from contract monomers to polymers back in the €200 / MT range, producers will be looking at losses, particularly with continued high energy costs. There is already talk in the industry of supply being restricted and planned maintenances brought forward. We should see a plateau reached soon either through demand picking up or supply being restricted.

Visit the Price Know-How website to read the June 2022 update in full, including an in-depth analysis of each market segment and material group by Plastributions expert product managers.

Price Know-How is an industry-leading report produced to keep you updated on polymer pricing and market fluctuations. A trusted, go-to resource for over a decade, Price Know-how is produced by the thermoplastics experts at leading polymer distributor, Plastribution with data from Plastics Information Europe.

Unlike many pricing reports, Price Know-How is tailored specifically for the UK polymer industry. We do all the currency conversions so you don’t need to!