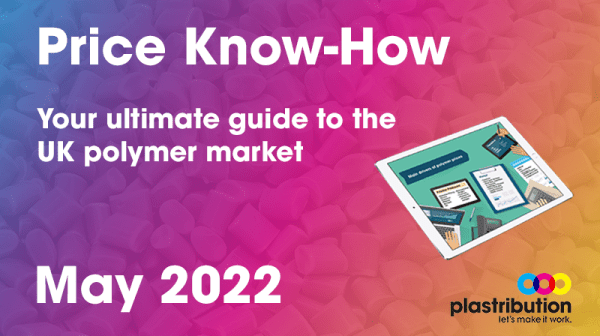 At long last, we see C2 (Propylene) and C3 (Ethylene) prices dip, after a steep climb through the first 4 months of 2022.

Polyolefin buyers will press hard for these feedstock reductions to be reflected in Polypropylene and Polyethylene pricing this month.

In marked contrast, Benzene and SM (Styrene Monomer) prices surged forward again in May, with the prospect that HIPS (High Impact Polystyrene) and GPPS (General Purpose Polystyrene) prices will be propelled to record highs. 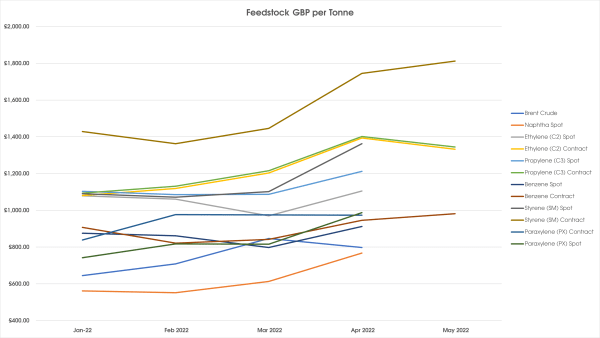 For polymer producers and polymer converters alike, energy costs remain a matter of inflationary concern, as gas and electricity costs remain high because of supply uncertainties resulting from Russia’s invasion of Ukraine.

The USD has continued to strengthen over the past two months.

The GBP has remained stable against the Euro, trading in a tight range between 1.18 and 1.21

Oil prices have become increasingly volatile. The initial rapid price increases that took place after Russia invaded Ukraine have more recently been countered both by fears of further lockdowns in the Chinese economy due to fresh outbreaks of Covid-19 and by the decision of the US Government to release strategic reserves.

It is of note that natural gas prices remain high, largely because it is more difficult to switch away from Russian sources due to the relative difficulty of transporting natural gas compared to crude oil.

Prices in May have started to slip as downstream cost pressures eased. Monomer rates dropped as a result of falling raw material prices, better availability and weaker demand.

Propylene (C3) dropped €65 with Ethylene (C2) falling €70. Most major suppliers looked to limit the decreases to the monomer with some offering better pricing. As the month progressed and demand remained low, many offered further reductions to try and stimulate demand. Reductions of €100-130 / MT now appear to be the standard. Some grades are under more pressure (such as Homopolymer PP) whilst specialist grades such as EVA and Elastomers are still rolling over as availability is severely restricted.

Demand appears to be weak for multiple reasons. Overall demand in the economy is lower due to lower growth and possible recessions looming, but buyers are anticipating further decreases in the coming months and attempting to limit their purchases to the absolute minimum. However, the spectre of global supply issues still looms and we are still experiencing shipping issues from the Far East and the Middle East. These regions are key to keeping Europe supplied with many Polyolefin grades (particularly HDPE and LLDPE). Further disruptions to these supply chains could lead to short term availability issues and put a brake on expected price drops.

Prices are generally expected to fall further in June unless there are any sudden spikes in oil prices etc. or availability of monomers due to the ongoing crisis in Ukraine. A plateau is likely to be reached in the coming months. Many of the major producers in Europe are actively discussing reducing output to match demand and level pricing off.

LDPE pricing dropped in May by approx. £100 / MT as some producers looked to stimulate demand and traders followed to keep stock turning over.

Pricing is now around £1,600-1,650 / MT for most grades though higher prices for speciality grades persist. Outlook for June and beyond is for further slight softening.

LLDPE pricing also dropped by approx. £100 / MT but the prices reported were in a wide range. Some are still seeing £1,600 / MT but others are reporting cargos that left in February before the Ukraine crisis arriving at £1,300 / MT.

Premium for C6 hexene grades persists on poor availability and is reported at £1,850-£2,000 / MT, though many are choosing not to buy.

Metallocene is getting better in availability and prices are slipping accordingly, though the cheap imports from USA are still absent.

HDPE dropped £100 / MT as fears over a lack of supply from Russia affecting the market were unfounded.

Whilst the UK is introducing 35% tariffs on imports of PE from Russia, there are still plenty of alternatives available. Blow moulding pricing held up better and didn’t fall as much as film and injection grades. All seem to be in the £1,500-1,600 / MT bracket depending on when you want delivery.

Pricing should continue to soften a little in the coming months. Exports from USA are expected to start shipping soon.

PP dropped in May and whilst prices at the top end of the market stayed stronger, spot offers for imported Homopolymer grades increased in quantity and pushed pricing down accordingly.

Prices will come under more pressure in June and beyond as demand in key markets for PP continues to underperform expectations.

EVA continues to be very restricted; VAM is in short supply and there are multiple reports of availability issues of VAM and the building blocks that go into making it. European production is limited, and prices are largely rolling over, even in the face of significant price drops in other areas.

Speciality OPP is restricted with some key European plants experiencing production issues. Prices are staying high in this sector.

Production of SM is very energy-intensive compared to other monomers, causing Styrene to be extremely reactive to any changes in energy cost. SM supply also dropped as EU supply tightened, and US imports fell to almost nothing. As a result, Polystyrene production was low and logistics issues did nothing to help the situation.

PS demand from converters was unusual. For some, only essential material was purchased at these record prices. Others cancelled orders entirely, while some larger converters chased security of supply, casting the net wide in search of material.

May SM contract price settled at €84/T higher than April – an all-time high. These increases are still driven by spiralling energy costs, and concerns surrounding gas supply in Europe.

PS followed these increases, with an added energy surcharge from some producers. Supply will remain tight as producers attempt to avoid overproduction, generating a stockpile of high price material, while converters will be forced to choose between security of supply and record pricing.

ABS rose by an average of €375/T in April. Despite this, demand and supply were balanced. EU ABS producers were forced to follow the rising composite monomer increases (SM +€360/T, butadiene +€200/T, ACN +€400/T), with energy surcharges being applied as well. On the other hand, Asian import prices rolled over, or even fell slightly in some cases.

Surging monomer and energy costs in May can only push prices higher. Monomer prices have risen again ((SM +€84/T, butadiene Roll, ACN +€14.5/T), and rising energy costs will have to be added to this. Asian import pricing is less reactive, but supply is not large enough to smooth out the peaks. It must also be assumed that price increases of this magnitude will throttle demand.

As usual, PC/ABS price is following the trend of ABS.

SAN and specialities such as ASA and SMMA continue to follow the price trend of ABS.

A vast array of price increases have been announced between 100-800 euros per metric tonne. Raw materials, energy costs and transportation are still escalating.

The situation for supply on standard grades is sufficient, however there continues to be restricted supply of more speciality grades.

A wide spread of price increases have been announced to the market of between 200-1000 euros per metric tonne.

Very restricted supply is one key factor due to a distinct lack of imports coming from the US. The ongoing war in Ukraine also continues to affect energy costs, transportation, and intermediates for PA66 materials.

Benzene contracts saw a slight increase of 45 euros per metric tonne for May, but with rising energy and transportation costs further price increases have been announced.

Production in Europe remains low with reduced outputs due to maintenance programs; however, supply should be adequate as we start to see more imports arriving from Asia.

Price increases announced to the market of around €350/tonne, and the supply of MMA is still noticeably short.

The situation for other engineering grades remains complex, difficult to predict and depends very much on the material type, but shortages and cost increases are still the norm for every polymer.

Visit the Price Know-How website to read the May 2022 update in full, including an in-depth analysis of each market segment and material group by Plastributions expert product managers.

Price Know-How is an industry-leading report produced to keep you updated on polymer pricing and market fluctuations. A trusted, go-to resource for over a decade, Price Know-how is produced by the thermoplastics experts at leading polymer distributor, Plastribution with data from Plastics Information Europe.

Unlike many pricing reports, Price Know-How is tailored specifically for the UK polymer industry. We do all the currency conversions so you don’t need to!