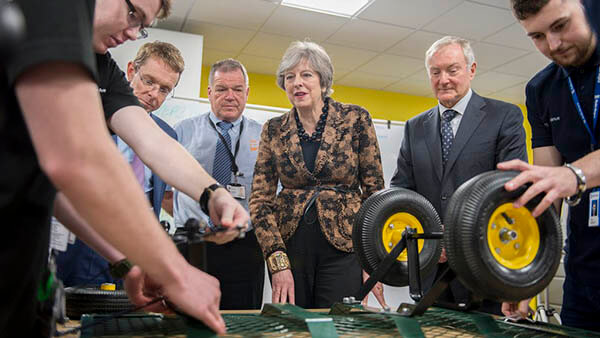 The Prime Minister, Theresa May, visited EEF’s Technology Hub in Aston, Birmingham with the Chancellor, Philip Hammond, and Business Secretary, Greg Clark, at the start of a week when the government will set out its plan for a stronger economy with a modern industrial strategy at its heart.

The Prime Minister saw EEF’s young apprentices learning the skills they need to take up the high-paid, high-skilled jobs of the future.

“I was delighted to show the Prime Minister the result of manufacturing industry’s investment in skills and training at our training centre, which we think is a blueprint for modern technical training throughout the UK. We look forward to working in partnership with ministers to see how we can replicate this across the country.

“The government’s commitment to boost research and development and spending on transport will be a tonic for businesses up and the down the land. By signalling her government’s commitment to a modern industrial strategy the Prime Minister has made a huge step forward in support of Britain’s economic stability. We are looking forward to the publication of the white paper and the rapid implementation of the plans as it is critical that the whole of government works together to deliver this.

“The industrial strategy couldn’t be more important as many UK businesses face significant Brexit uncertainty and need as much reassurance about the government’s direction of travel as possible.”