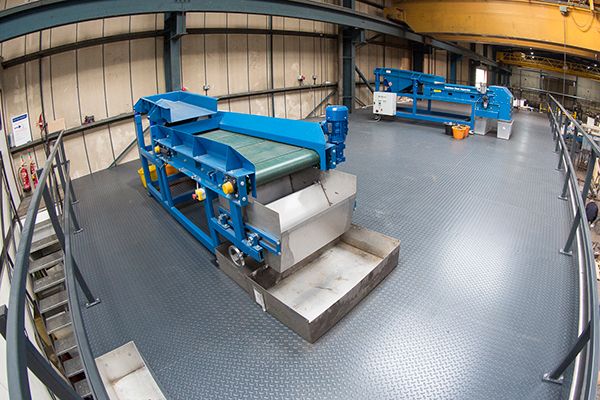 Following an increase in the demand for material testing, Bunting Magnetics Europe has constructed a new recycling test facility at their Master Magnets manufacturing operation in Redditch.  Initially, the facility will house two models of Stainless-Steel Magnetic Separator and an Eddy Current Separator.

“We are seeing an increase in the number of controlled material tests,” explained Adrian Coleman, Master Magnets’ General Manager.  “The tests confirm the separation performance, enabling the recycling company to calculate the benefits. As material specifications tighten and separation performance becomes increasingly critical, the number of tests we undertake increase.”

Bunting Magnetics is one of the world’s leading designers and manufacturers of magnetic separators and metal detectors for the recycling, quarrying and mining industries. Their wide range of metal separation and detection equipment is manufactured at their Master Magnets facility in Redditch, just outside Birmingham, UK.

There is a growing demand for material testing, especially on the Stainless-Steel Magnetic Separators.  Many of the visitors to the Bunting and Master Magnets ‘Metal Separation Test Centre’ stands at the IFAT and RWM exhibitions expressed interest in the operating equipment on the stand.  Following further discussions, companies requested to undertaken controlled tests to confirm the level of metal recovery.  Subsequently, in January 2019, Bunting Magnetics received three separate orders for Stainless Steel Magnetic Separators.  Two were following tests conducted at the Redditch facility.

The new Recycling Test Facility covers an area of 122 square metres and was constructed in less than three months.

The new Recycling Test Facility expands Bunting and Master Magnets’ testing capabilities.  One of the most extensive laboratories for high intensity magnetic separators for the mineral processing and ceramics industries in the world is already located at the Master Magnets plant.

“Already, the new recycling test facility is in operation on a daily basis,” said Adrian.  “Our aim is undertake tests for more companies.  We can demonstrate what separation is possible and, hopefully, help in maximising the economic viability of many recycling projects.”