VEKA Recycling: Celebrating 15 Years at the Forefront Of PVC-U Recycling 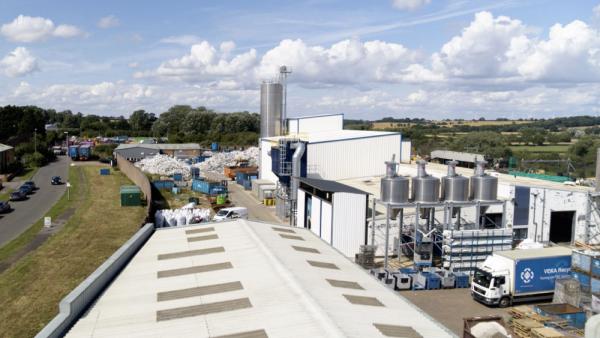 2022 sees the 15th anniversary of VEKA Recycling Ltd operating as an independent business in the UK. The company began trading at its original Swanscombe, Kent site in May 2007 before transferring to the present-day, 5.5-acre site in Wellingborough early in 2018. Since then, Europe’s most advanced PVC-U recycling facility has been constructed, coming fully on stream in December 2020.

Built at a cost of £15 million, an investment that is now almost double the original budget, the Wellingborough facility has the capacity to process up to 35,000 tonnes of post-consumer and virgin offcuts, most of which are now channelled back into the extrusion of new window profiles. Crucially, the decision to make the investment in the Wellingborough plant was made post-Brexit, confirming the commitment of VEKA Group to the UK market, irrespective of any politically related economic fears.

The Wellingborough plant is the third such facility to be built by VEKA Umwelttechnik GmbH, the specialist recycling subsidiary of the VEKA AG Group, of which VEKA Recycling Ltd is a wholly-owned division. The company has pioneered PVC-U recycling in Europe, with its first plant opening in Behringen, Germany, in 1993.  A further facility was opened in France in 2006. The combined capacity of the three plants exceeds 100,000 tonnes of PVC-U windows a year. The processes employed at all plants separate rubber, metals and other impurities from the PVC-U to enable re-use of all materials, with the Wellingborough facility deemed to be the most sophisticated plant of its type anywhere in Europe.

Simon Scholes, who began as Sales Manager and is now Managing Director, is the company’s second longest-serving employee (the longest-serving is driver and proudly self-proclaimed all-rounder Rob Lyons), joining the firm just a few months after it began trading. He said: “The Wellingborough plant was built from scratch to take advantage of the latest recycling technologies, and we now produce the highest quality polymer for use in a range of products, including brand new window and doorframe profiles. We have the ability to promote and deliver PVC-U windows as truly sustainable at a time when plastic generally is under close scrutiny and to make the most of what is a tremendous resource. And of course, greater emphasis than ever is now placed on recycled PVC-U material following the supply chain issues that have hit the industry in recent times.”

Homeowners are becoming increasingly aware of ways to reduce their environmental impact, with retail installers also reporting an interest shown by homeowners in the future of the windows being removed from their homes: “The recent FIT Show provided considerable anecdotal evidence that homeowners now want to know that the PVC-U windows being removed from their homes will be dealt with sustainably. This is gathering momentum, with more retailers now proactively advising homeowners that their old windows will be recycled,” explained Simon.

The leadership shown by VEKA in pioneering recycling of PVC-U extends to educating everyone in the supply chain and cleaning up the image of reprocessing, says Simon: “We are determined to make sure people understand the logistics and realities of recycling windows, especially the potential consequences for installers and their homeowner customers for committing waste fraud, which is a serious issue.”