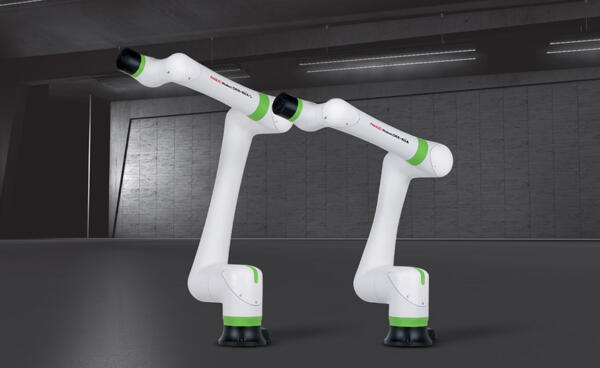 With a view to tackling global skills shortages and the need to increase production flexibility, FANUC has launched its first-ever lightweight collaborative robot, the CRX-10iA.

While all six models in FANUC’s current ‘green’ CR series of collaborative robots are closely based on the company’s proven and widely used industrial robots, the new CRX-10iA collaborative robot is a completely new category. Launched at iREX, the world’s largest robot trade show, in Tokyo, the CRX-10iA intends to broaden the scope of collaborative work able to be undertaken between robots and manufacturing employees.

Unlike FANUC’s existing CR series of collaborative robots, the brand new CRX-10iA is significantly lighter, weighing just 39kg. As such, it can be easily installed across a broad range of applications such as driverless transport systems and automated guided vehicles (AGVs).

A new innovation unique to the CRX-10iA is the ability to replace the Teach Pendant with a tablet computer, which increases ease-of-use thanks to a new user interface. Its intuitive operation will not only be of use to new users, such as the growing number of small and medium-sized companies looking to scale up their automation; but can also cut set-up times for more experienced users, such as those in the automotive industry.

As with all models in FANUC’s existing CR series, the CRX-10iA can be equipped with a vision system to enable autonomous loading and unloading of containers or shelving systems. The model on display at iREX showcased this ability by loading metal blocks into a ROBODRILL machine tool using a 3D vision sensor.

The CRX-10iA will be available to European customers from mid-2020.