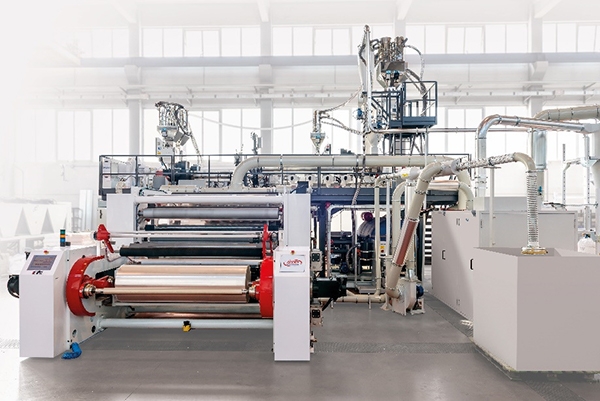 At the beginning of this year, AMUT GROUP presented one of the first cast film lines from ACP series for the production of CPP film.

The chill roll group consists of main and secondary chill roll. In order to be able to produce both types of the CPP film surfaces, the line is equipped with two different chill rolls. The roll fast change system enables the exchange of the main chill roll from one to another type in an extremely short amount of time.

This line is considered a flagship project in this field for having a 4-layer multi manifold die, which allows a very accurate distribution of the layers by using four extruders.

Depression air blade Mod. DV™ is installed behind the extrusion die to change the position of the die towards chill roll, as well as the film chill roll touching angle and to eliminate completely orange-peel defect. DV™ air blade unit has a very small surface for air sucking, so a smaller sucking surface on the same vacuum force increases the vacuum level. This drastically reduces the quantity of waxes condensation on chill roll, for better refrigeration, haze and gloss of the film and cleaning action on the chill-roll.

The independent rotary arm type winder is equipped with an innovative in-line cutting system for the production of finished rolls without any reduction of maximum winding diameter.

Another innovative feature is the compact design: 2100-mm wide line is installed in no more than 120 mÇ of space. As a result of the never-ending efforts of AMUT’s R&D Department, they are embracing a strategy oriented towards an enhancement of internal study and designing of main units to supply 100% dedicated solutions on the basis of final applications.