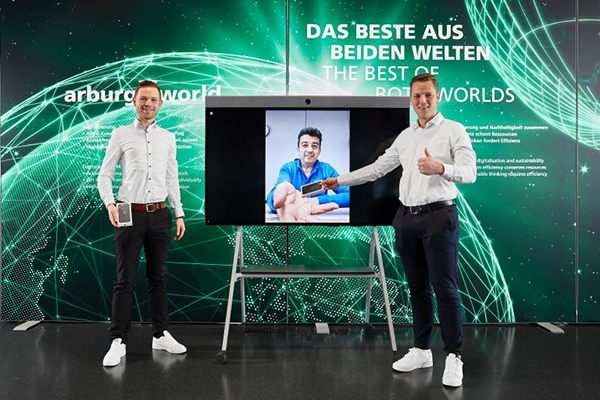 For several weeks, Arburg gave arburgXworld users the opportunity to participate in a survey voluntarily and free of charge. The company raffled off two iPhones among the participants of the survey campaign and announced the winners live at an arburgXworld webinar.

One of the lucky winners was named as Aydin Gencer from the company Walter Bethke. The second winner wishes to remain anonymous.

As a production manager, Aydin Gencer regularly uses arburgXworld and also took part in the survey on the portal site. The few minutes were well invested: Jens Kober and Christoph Schaber, both digital solutions experts at Arburg, handed over an iPhone 13 as a prize in a virtual live session during an arburgXworld webinar on 7 April 2022. In total, almost 300 customers from different countries took part.

Focus on use of the customer portal

As an industry pioneer in digitalisation, Arburg continuously adds new features and apps to its customer portal. The survey aimed to find out more about how customers use arburgXworld and how the portal can be designed to be even more targeted to their needs. Currently, far more than 2,500 customers and 7,000 users are active in the digital Arburg world. The free basic package and the fee-based expansion stages provide customers with real added value.

Congratulations to the winners!