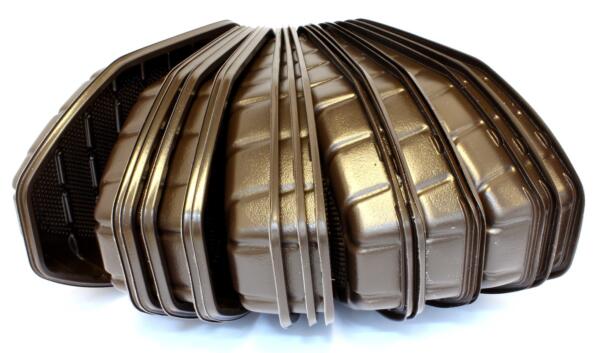 Caerphilly based manufacturer of coloured and additive masterbatches, Colour Tone warns that the reported 1.3 billion black food trays most commonly used for ready meals that are sent to landfill each year are just the ‘tip of the iceberg’ for Britain’s food packaging waste.

The same carbon pigment found in black food trays that renders them ‘invisible’ to sorting machines in recycling depots, is present also in some blue, grey, brown and many more dark coloured food packaging items, which means the problem is far more widespread than previously reported. Bristol City council for example, already advises its residences to treat black, grey and brown plastics as ‘rubbish’.

At present black and dark coloured trays feature a relatively cheap carbon black pigment, which cannot be detected by the existing NIR  sorting systems used widely in plastics recycling as it reflects little or no NIR radiation.

Tony Gaukroger, Director, Colour Tone which was recently acquired by compounder Luxus said: “The supermarkets must admit that black food trays represent just the ‘tip of the iceberg’, there are many more types of aesthetically pleasing coloured trays and cartons appearing each year that present a growing landfill crisis from brown coffee pods to blue fish trays.

“As the dark plastic tray debate continues consumers’ plastics recycling efforts are rewarded by simply being turned into rubbish. The supermarkets are still refusing to take action despite awareness of a novel pigment that if adopted can help solve this problem. Instead they still question who should pay?

“This is hard to believe when the cost would be just 0.05p per tray, a small fraction of a penny and not even the 0.5p that has been recently reported. Yet the increasingly popular coloured trays can cost up to three times that amount.”

Colour Tone had been working as part of a consortium on a project commissioned by WRAP, ‘Development of NIR Detectable Black Plastic Packaging’*, to help develop a near infrared or detectable pigment. In materials validation trials it has been proven conclusively that this novel pigment will ensure that black and the many dark coloured trays and tubs can be easily detectable in the mixed plastics waste stream.

The result is that this high value polymer material can be effectively sorted to create a new resource of benefit to the viability of mixed plastic recycling itself and by helping to reduce landfill.

In an effort to reduce the volume of black waste found in sorters and the ‘deadlock’ with the supermarkets, WRAP published new guidance just last week. It advised local authorities to include black plastic among the items considered now as ‘rubbish’ for the first time in recent years, stating: ‘sorting equipment cannot detect the colour black and therefore it is not recycled”.

Tony Gaukroger continues: “This guidance flies in the face of recent advances made in detectable pigment technology and growing consumer anger that the black plastics they have recycled for many years have been landfilled. This is just as the government recently reported that recycling rates for waste have dropped for the first time since 2010 to 44.3%.

“This difficult situation is made worse by the fact that black and coloured polyester (PET); is just one type of food packaging waste. Serious thought must be given also to the many other plastics found in fast food packaging for example, such as polystyrene (PS), polypropylene (PP) and PVC. These are not widely recycled in practice either – then the true size of the ‘iceberg’ then becomes clear.”

According to Plastics Recyclers Europe (PRE) data, ‘there were 800,000 tonnes of PET based black trays in the market in 2014 and it’s estimated the amount of PET based thermoforms in the European market will reach 1m tonnes in 2017.”

“If this waste cannot be automatically sorted in all its forms, including black and dark coloured packaging then the EU’s recycling targets will simply not be reached. This would put local authorities at risk of penalties which will no doubt hit the ratepayer with increased council tax hikes.

“The commercial ‘barriers’ to this pigment’s adoption must be overcome to help address our landfill crisis and pressing consumer concern. Otherwise the goal of zero plastics landfill cannot be achieved and local authorities will risk hefty fines for failing to meet targets in the future.” Said Tony Gaukroger.