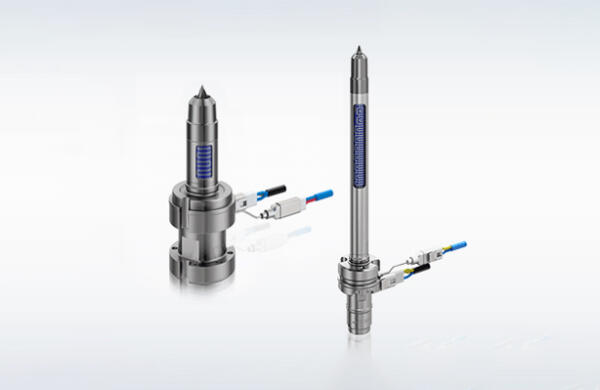 Günther’s BlueFlow® heater technology incorporates several advantages compared to the conventional coil heaters traditionally seen on hot runner nozzles. Not only are these elements considerably smaller in diameter but they also allow a substantially improved temperature distribution and an extremely fast thermal response. Other features are their high electric strength and resistance to moisture. These features combine to give a more compact, precise and energy-saving hot runner design and ultimately, a more efficient injection moulding process.

Produced entirely on Günther’s main manufacturing site in Frankenberg, Germany, the BlueFlow® heaters were developed over ten years of intensive research and development and give Günther a unique selling point on the hot runner market. Aside from the colour, what is immediately striking about the thick film heaters is that they are considerably thinner and smaller in diameter than the coil heaters currently on the market. The path of the heater can be applied in a thin strip and therefore more individual design resulting in a more even temperature distribution over the whole nozzle. Even the most sensitive high-temperature polymers with or without glass or flame-retardant additives can be easily processed.

The construction of the thick film heaters is relatively simple. A dielectric layer and heating traces are screen printed onto a stainless steel sleeve and subsequently burnt in under clean-room conditions. An additional layer then insulates and protects the heating element from outside influences.

The real advantage of the thick film technology is that the heater paths and thus the heater itself are brought even closer to the polymer; the power distribution can also be positioned much more precisely to realise a much more homogenous heating and processing of the plastic. As an example, heat can now be concentrated where it is most needed, at the tip of the hot runner nozzle.

Since the thick film heater is less than 200µm, very small nozzle geometries are possible, allowing smaller nozzle pitches and overall tool sizes. As an example, a nozzle which previously had an external diameter of 22mm is now reduced to just 18mm including the patented Günther titanium shaft. Another advantage here is that the reduced diameters allow for improved and more efficient mould cooling layouts. Energy-saving results primarily from the lower temperature of the current-carrying heater trace.

To prove the potential energy savings offered by the BlueFlow® heaters Günther carried out trials with conventional nozzles of similar dimensions from various competitors with impressive results. This new technology showed energy savings of over 50% during production in some cases (see below image). With the cost of power today, the slightly higher cost of a BlueFlow® nozzle can be amortised within one year. 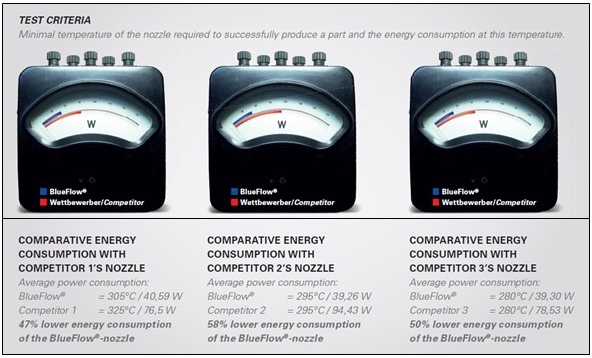 A further advantage of this new technology is their resistance to failures caused by power surges, which can be a common cause of failure with conventional nozzle heaters. The new heating elements were tested with up to twice the usual test voltage (1.5kV) and passed with flying colours.

A hot runner energy calculator can be accessed from the website www.blueflow.de where the customer can calculate the cost savings over time according to which nozzle type. This is a useful tool to determine the amortisation of the system to you.

In conventional hot runner heaters, magnesium oxide is used as electrical insulation around the current-carrying wire, which is hygroscopic (absorbs moisture). In contrast, the dielectric and conductive trace layers of the BlueFlow® heaters are non-hygroscopic. This means that a soft-start of your hot runner nozzles, to protect the heaters from moisture, is no longer necessary with this nozzle type. Production can be started immediately.

BlueFlow® – Technology with a lot of advantages

In conclusion, the BlueFlow® heaters from Günther offer the tool designer, mould maker and moulder several advantages in day-to-day use. The reduced installation diameters allow smaller pitches, better cooling layouts and sometimes even the possibility to use a smaller moulding machine to save operating costs. Greater scope is given to the tool designer to arrange his cooling channels close to the gates and gives more flexibility overall with the tool and part design.

The optimised and homogenous temperature profile and the quick thermal response of the BlueFlow® nozzles can reduce the scrap rate, improve part quality and in some cases, even reduce the cycle times.

As well as being fitted to new moulds this system can also be retrofitted to existing moulds which perhaps are performing poorly or to reduce energy bills.

Gunther UK Ltd has been representing Günther Hot runner Systems in the UK for over 30 years now. The main manufacturing plant in Germany employs approximately 240 people, with subsidiaries and agents across the world.