On the first day, the group arrived to a buffet reception before a brief introduction from Managing Director, Joe Maynard. Then there was a presentation on the history of the company, presented by Sales & Marketing Co-ordinator, Colin Tompkins. 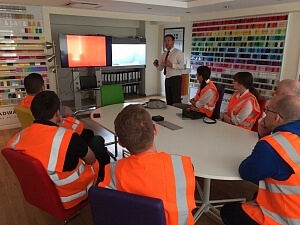 The delegates were then split into three groups to take part in a Colour Perception seminar, a Masterbatch facility tour and a tour of the Laboratory and R&D facilities.

The Colour Perception seminar, presented by Commercial Director, Nick Barber, covered how light plays a major part in determining a final colour, and that the eye is not always right. It also covered how pigment selection can affect the longevity and performance of the final product.

Nicola Bunting from 493k attended for Day 1, and said, “how interesting the seminar was“. Nicola went on to say, “I came away with loads of facts about colour perception – none of which my children believe!“ 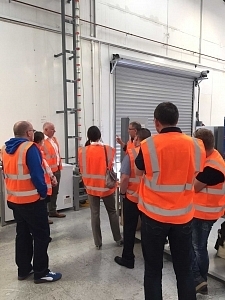 Here we see Dr Nick Henwood demonstrating impact testing as part of the Laboratory and R&D tour. The delgates were also informed about the extensive weather testing facilities at Broadway Colours, and demonstrations of the results of weathering and UV exposure were presented too.

Carl Futcher from PlastikCity said, “What I found very impressive was how Broadway control every part of the process, having fantastic manufacturing facilities for producing custom colour and universal masterbatches, as well as rotomoulding powders.” He went on to say, “I didn’t have a clue there was so much involved in the production of ‘Colour’ but I’m delighted that a British manufacturing company is leading the way forward.“ 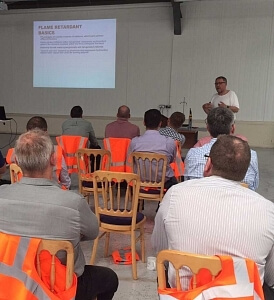 The second day was based around three lectures, presented by Dr. Nick Henwood. Lecture 1, was on PE Blends – the properties of PE, why we blend different grades, what can go wrong etc.

Lecture 2 was on additives, and featured a live demonstration of a vertical Flame test. This also covered anti-oxidants, UV stabiliser, Conductives, Pinhole reducers and release agents. Dr Henwood covered their properties, when to use them and why they are used.

Lecture 3 covered the properties of the powder itself – particularly powder flow. The presentation included a video of 493k’s Roto Rocket demonstrating the distribution of powder in the mould.

In between lectures there was a tour of the grinding facility, hosted by MD, Joe Maynard and Laboratory manager, Chris Gramlick.

Day 2 closed with a networking session and buffet lunch.

Shaun Mills, Production and Techincal Director of Rototek said that “All employees were extremely helpful and courteous and went out of the way, while working to explain the various functions of the machines they were running and answered all our question or queries“. He went on to say, “I have been in several of Broadway’s competitors processing plants and I do not believe I have ever been more impressed with how an operation is run so smoothly or efficiently before“. Finally Shaun said “Overall you have totally changed my perspective on Broadway Colours and can see you are an inventive and progressive company with a wealth of experience”

Nick Barber, Commercial Director for Broadway added, “From our point of view, the workshop could not have gone any better. We would like to extend a personal thanks to all that attended, and we are glad to see that everybody took something useful away from it. Here’s to the next one…”