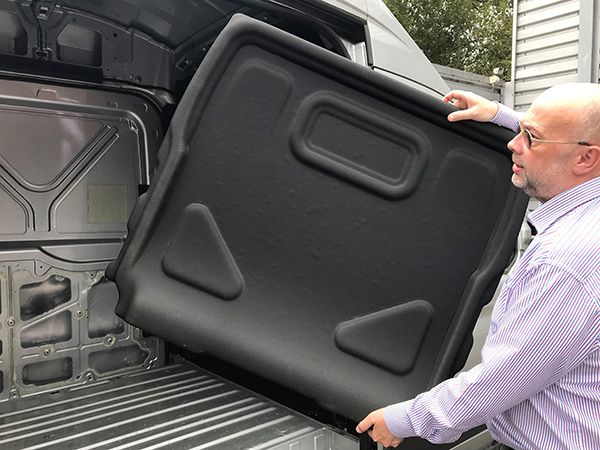 The Horners Award for Plastics Design and Innovation unveiled the Thermoplastic Bulkhead as its winner on Tuesday 2nd October at the Horners Annual Banquet, at Mansion House in London.

The car component, developed by RLE International, represents a mass saving of 34%, and a cost saving of 10% when compared to the existing metallic bulkhead typically found in vehicles.

Judges recognised its light-weight and associated fuel saving advantage and praised it as an eco-friendly development for the automotive industry as the bulkhead is also fully recyclable. The winner was presented with their certificate and Horn trophy by the City of London Lord Mayor Locum Tenens, Alderman Sir Andrew Palmley at the banquet attended by distinguished guests.

Another finalist, Amaray, received the British Plastics Federation (BPF) Award for its Corretto Cup: a recyclable, reusable and insulated cup designed to replace paper cups which cannot be recycled. It features EcoCore™ foamcore walls that retain the heat of the drink whilst preventing burning for the user.

“We are delighted by the range and quality of the entries we received this year – which just goes to show that the plastics industry is still, as it has always been, very much at the forefront of innovation. The winner, RLE International, for their low-mass, cost-saving bulkhead, demonstrate how crucial plastics are in providing innovations that help us lower environmental impacts.”

This year, the competition was fierce – with three innovations receiving Highly Commended awards. The first was UniSafe™ by Owen Mumford, an easy to use springless safety-device for pre-filled syringes, designed to reduce risks of traditional safety syringes.

The third highly commended innovation was the APIS Beehive, designed and developed by De Montfort University graduate, Olivia Alexander. Her compact beehive is made from recyclable plastic, cork, wood and rope, designed for use in garden spaces.

The Award is believed to be the longest running plastic design award in the world and is jointly run by the Worshipful Company of Horners and the British Plastics Federation. Entries for next year’s award can be made on the BPF website.