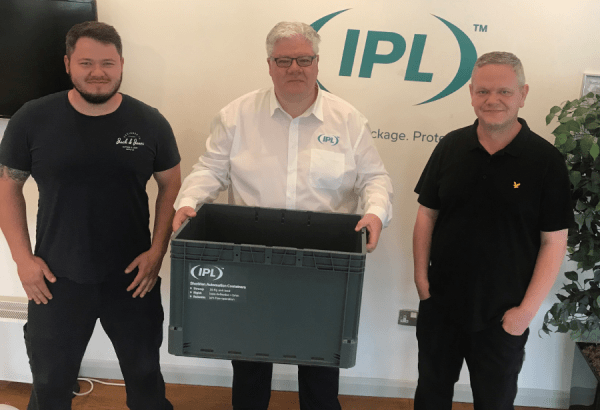 Building on the IPL Group’s unprecedented growth in sales of returnable transport packaging, a new range of automation totes will be launched this year. These are specially designed boxes for the automated picking systems used by supermarkets with delivery services.

Called the Sheridan family of products, the totes meet the demands of the latest conveying and automated warehouse applications, including the newest FM global requirements for drainage.

The products will be manufactured at IPL’s Tamworth site and are named after the Sheridan family. The family have a long history of working at the site, both before and after it became part of the IPL Group.

Dave Sheridan first started working at the site in 1983, when it was still part of the Peerless Plastics Group. Over the years, his career progressed from Machine Operator to Production Manager, eventually becoming the sites Operations Manager in 2008. Dave now has overall responsibility for production at Tamworth’s Industrial and Packaging divisions, which combined, boast 53 injection moulding machines.

Until retirement, Dave’s mother, Maryanne Sheridan, worked alongside his wife Mandy in the company’s cleanroom facility. Dave’s brother Dean and son Danny are both Shift Team Leaders, Danny having started as an apprentice around eight years ago.

“We have been working on the development of the new tote for some time, designing the product with direct input from our customers and our many years of experience developing similar tote solutions. We are confident that it easily exceeds all current alternatives in terms of build quality, ease of use, and compliance with the latest legislation.

“The naming of the new product line came as a complete surprise. I joined one of our weekly team meetings partway through and told about IPL acknowledging the links between the Tamworth site and the Sheridan family. I’m not someone that usually welcomes any form of personal acknowledgement, but I have to admit that having our family name associated with what we believe is a ‘best in class’ product is a real honour.”

The two sizes of the tote are nearing completion of their tool trials and will be officially launched later this year.