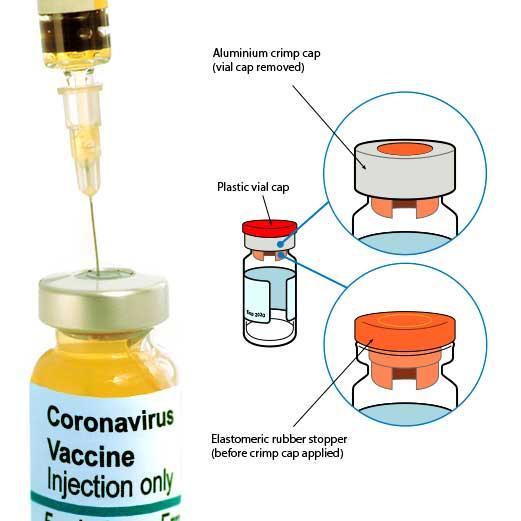 In a recent case study, Mecmesin carried out quality control tests on the physical properties of injectable medicine containers. Force and torque test systems were required for compression and rotational tests and penetration and compression fixtures for cap torque tests.

COVID-19 vaccines, as parenteral medications, enter the body by injection through the tissue and circulatory system. In line with the majority of parenteral drug products, these vaccines are manufactured in glass vials (or phials) and sealed with an elastomeric rubber stopper and a crimp cap.

Testing the physical properties of these vital drug container systems is a key factor in quality-control testing.

Vial sealing is a critical process step during ‘fill and finish’ operations, as it defines the seal quality of the final product, ensuring sterility and preventing leakage. Of particular interest is the effectiveness of the rubber stopper when in its compressed state and how well it is restrained by the aluminium cap, which itself is folded and crimped securely under the vial flange.

The Residual Seal Force (RSF) is commonly measured, as part of a ‘Container Closure Integrity (CCI)’ testing process, to characterise the performance of capping equipment and is referenced in USP 1207.3. A universal testing machine applies force onto the sealing surface. The rubber stopper acts like a compressed spring, pushing up against the test system. At the very moment that the tester overcomes this compressive resistance there is a discernible kink in the Force/Displacement curve, which equates to the RSF.

The Torque Retention of the aluminium crimp cap is also a good indicator of seal quality and is significantly impacted by the Residual Seal Force. The vial is held in the jaws of a torque tester and the crimp cap is rotated to establish whether it breaks loose. Crimp caps that break loose at low torques may not be adequately restrained by the rubber stopper and therefore correlate to low RSF values.

A key component for protecting the rubber stopper is a plastic vial cap, which is flipped off to reveal the stopper. This cap needs to be held in place with sufficient force to prevent it from falling off during production, packing, storage and shipping. However, it must not be too tightly fitted such that the user cannot easily remove it when the vial needs to be accessed by a syringe. Testing the flip-off removal force is a good indicator of whether the capping machine has applied excessive force and possibly damaged the cap’s retaining lugs or has caused the lyophilization stopper to expand and pop off the vial cap. ISO 8362-7 describes a suitable test method.

The final strength test associated with the vial involves characterising the force required for a hypodermic syringe needle to pass through the elastomeric closure. The penetrability test is described in USP 381 and stipulates that the rubber closure should allow the needle to pass through by pressing no harder than 10 N so that drugs can be easily administered and needles not damaged or blunted through excessive force.