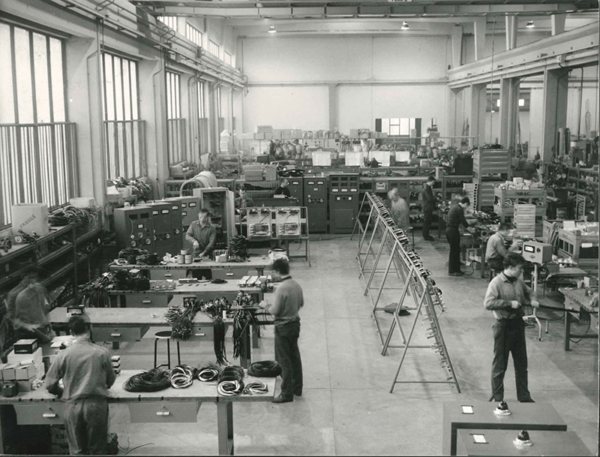 In 1947, exactly 70 years ago, Negri Bossi started its long life in the injection moulding machine market. M. Pietro Negri from Oggiono (COMO) and M.Walter Bossi from Besozzo (VARESE), with the assistance of accountant Marco Giani from Cremona, formed the Negri Bossi company.

The three men had previously worked together from 1943 to 1947 in COGEMA (General Company of machines and equipment for plastic material founded by Giani) where the first injection moulding machine was produced. In 1947, in the newborn NB company, M.Bossi was the technical designer, M.Negri with mechanical engineering qualifications, was in charge of production and M.Giani provided commercial support.

There were approximately 10 employees in the first headquarters in Corso Magenta 44 in Milan. Later in the same year, there was a move to a bigger facility in Via Bazzini as the company experienced rapid growth.

The first machine produced was a NB 28 which had a 15 tonnne hydraulic clamping unit with 2 tie bars. The mouldings produced were buttons in a polystirol material with a weight of 28 grammes. The customer was from Bergamo and the machine was sold for 450.000 lire (232 euro). It was interesting that the pump used was a Vickers, found in ARAL camps left by the Americans after the War. It was the first machine produced in Italy and unique in the market! During these periods, there was limited manufacturers of hydraulic equipment in Italy, so Negri Bossi produced a lot of their own actuators.

Around 1948 M.Bossi started to work with M.Gianni Bodini, who in 1958, became the Technical Director and the manager of design and projects. In 1964 Negri Bossi moved permanently to its present location, Cologno Monzese (Milan).

During this period Negri Bossi acquired many worldwide patents with their designs, and machines with clamping units from 15 to 1200 tons, were produced. Thanks to a large growth in 1960, Negri Bossi opened a new warehouse in Pero (Milan).

M.Negri passed away in 1970 and M.Bossi remained with the company until he retired in 1979.

Over their 70 years Negri Bossi has undergone different acquisitions but it always maintained the founders’ vision. The company has always developed machines that contributed to the history of the injection moulding machine market, whilst always anticipating technological trends.

Thanks to all who have given longevity and greatness to this illustrious brand. Today Negri Bossi is the largest Italian injection moulding machine manufacturer and a leader in the world market.