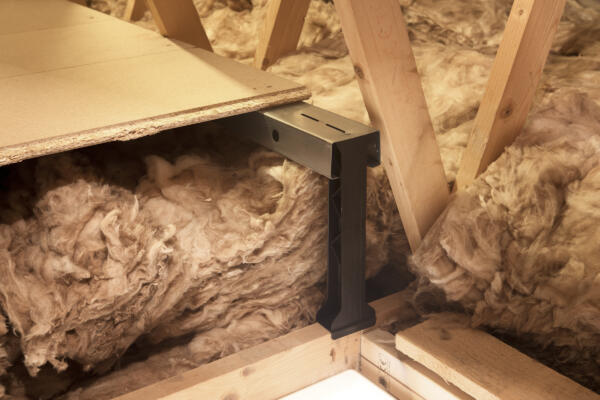 LoftZone StoreFloor is a unique loft boarding system that can hold an impressive 500kg per square metre and is manufactured from recycled polymer. LoftZone has been a customer of Pentagon Plastics since 2012, but recently invested in additional dedicated tooling to meet rising demand.

The LoftZone StoreFloor loft boarding system that can hold an impressive payload, easily surpassing the British standard 6399-1:1996 for minimum floor load requirements. This allows customers to easily create a strong and safe loft platform inside their homes.

LoftZone StoreFloor has been a customer of Pentagon Plastics since 2012, originally approaching Pentagon looking for a UK supplier of mould tooling and plastic injection moulding.

Production of the Uni-Support component which enables you to elevate loft flooring to allow insulation to remain fully effective and uncompressed under loft flooring, started life as a single impression mould tool manufactured at Pentagon in 2012. In the early days of production, an average annual demand was 19,000 parts per year. In 2015 the mould tooling was modified to be a two-impression mould tool to keep up with increased product demand as annual figures reached 50,000.

With LoftZone StoreFloor predicting hundreds of thousands of parts being produced in 2020, they took the decision to invest in a dedicated 4-impression mould tool which will enable them to meet the exponential increase in demand since production began in 2012, and reduce the component price significantly.

Paul Edwards, Pentagon Managing Director, says “We enjoy a great working relationship with the team at LoftZone built on trust and are proud to have played a part in the growth of the business. From the outset, we could see the benefit the system offers and it’s great that it is UK manufactured.”

Pentagon has supported LoftZone through all stages of product growth with a significant customer investment of tens of thousands in mould tooling over the years.  Collaboration at an early stage of the initial design phase has allowed Pentagon to support the production process at every level, understanding and adapting to the needs of the customer.  Offering technical advice on design, material and manufacture has allowed both tool build and production to run seamlessly over the years while continuing to support the significantly increased demand for the Uni-Support product.

Dave Raval, CEO of LoftZone, says “I didn’t want to use Chinese tooling owing to concerns around some conduct within the country, and Pentagon has always been a reliable, honest and quality UK toolmaker and moulder for us, so we are very pleased to be able to continue our relationship with them.

“Pentagon supported us when we were a start-up with a good idea on a piece of paper, and now that we’ve become the largest supplier of raised loft boarding systems in the world, we are very pleased to count Pentagon not just as suppliers, but also as friends.’’

Having both mould tooling and plastic injection moulding undertaken on one site of UK manufacture means that LoftZone enjoys continuity of both service and quality through our working relationship.

LoftZone have some exciting new products in the pipeline and Pentagon look forward to supporting them further over the coming months and years.