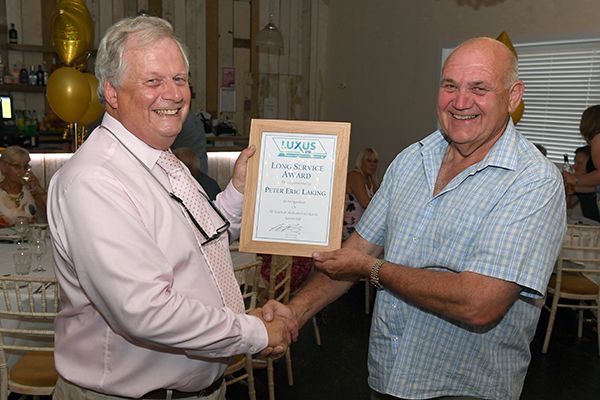 Peter Laking is celebrating one of the longest careers with Louth based technical plastics recycler and compounder Luxus – an incredible 50 years’ service!

In 1968 the Beatles single ‘Hey Jude’ was topping the charts and the Ford Escort had just replaced the Anglia, Peter Laking started his career as a factory worker with Luxus. The firm had just seven employees when Peter joined, who were all on first name terms at the time.

This burgeoning plastics recycling business was recovering unwanted waste plastic and re-engineering material that would have otherwise been destined for landfill. Plastics recycling was a new industry in the late-1960s, the mantra ‘reduce, reuse and recycle’ has only just gained in popularity, it was the start of a new sustainable ethos.

Peter Laking describes what it was like to work at Luxus in 1968, “The work was very hands on at the time, one of my very first jobs was working on a granulation machine grinding polystyrene shoe heels and then bagging the reground polystyrene from an auger.

“There were no forklift trucks then, so we took each polystyrene filled bag off the machine, weighed it, (around 56 lbs), then fitted a wire tie around it like you would a potato sack, so it could then be carried over your shoulder to be stacked in piles, five bags in a layer, eight bags high – a total of 40 weighing a tonne!

“In my generation, once you found employment you didn’t think the ‘grass was always greener’ somewhere else. If you liked the people, the job prospects and the money you just gone on with it. The opportunities for growth were great, as they still are today for young people wanting to join the industry.”

In the late 1970’s when Luxus purchased its first lorry, Peter became a HGV driver helping with deliveries, but his real passion was fixing things. So when Luxus’ new factory was built in 1982 he helped to install and maintain its new machinery. His career was also supported with practical training so he learnt how to weld, turn metal on a lathe and acquire other new engineering skills too.

He was later promoted to assistant factory manager in the firm’s plastics compounding division as well as running a small engineering team. Then in the early 1990’s Luxus purchased a new recycling factory also on Belvoir Way in the Fairfield Industrial Estate, Louth where he became factory manager while still managing his now rapidly growing team.

Five decades later having ‘out-careered’ the Beatles he is still working for Luxus as a Maintenance and Project Engineering Manager. He not only manages his engineering team, but is constantly found re-engineering machinery to help provide bespoke solutions where needed to facilitate the smooth running of its technical recycling facility.

Even when he went on holiday some years ago, plastics were never far away in Peter’s thoughts, while eating dinner out with friends he got bored so he decided to burn the plastic knives and forks to entertain them by being able to recognise the exact plastic type simply from its smell and the way it bends. As it wasn’t the first time, his friends decided to reward him his very own ‘plastic is fantastic’ t-shirt.

Luxus managing director, Peter Atterby, comments: “Throughout his 50-year career, Peter’s support has been instrumental to our growth every step of the way, from a burgeoning plastics recycler to a UK leading technical innovator at the very forefront of numerous markets.

“Not only is Peter’s knowledge of plastics recycling second to none, he also has an energy that leaves younger men trailing behind breathless. As we move into a new era, with demand for sustainable polymers is an urgent priority for many producers, Peter is sharing his 50 years of expertise with the next generation of plastics pioneers – he is true asset!”

Luxus today is a £25m turnover business operating in global markets and is still fulfilling the same vision set in the 1960’s by its founder Ron Tonn, for a better, more sustainable future.