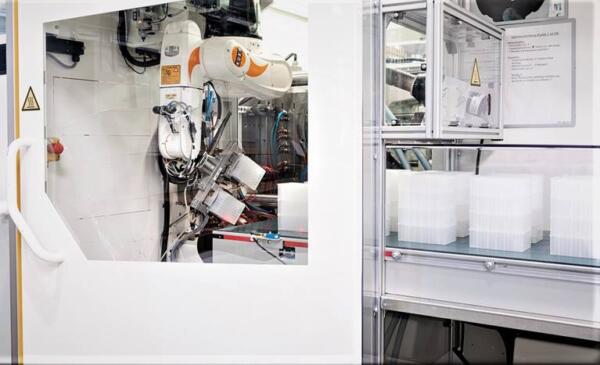 For several years now, KUKA robots have been an integral part of the production of plastic medical laboratory products at Ritter GmbH. Demand has risen due to the coronavirus pandemic. A further seven injection moulding systems with KUKA robots are now being added at breakneck speed.

“We produce under the highest standards of hygiene. Our products must not contain anything that could falsify the tests in the laboratory. This was one of the reasons why we decided to use robots in our production,” says Ralf Ritter, who, together with his brother Frank Ritter, runs the Schwabmünchen-based company in the second generation.

In their injection moulding facilities, the plastics specialists produce medical consumables that are used in laboratories, for example, when liquids such as blood have to be analysed. The robot unloads the system, places the finished cast part in a testing system and then on the assembly line. So-called microtiter plates and pipette tips are produced to handle the test liquids. “The demand for our products has increased incredibly in the last few weeks. We are now multiplying our capacity in order to be able to supply German and European laboratories and specialist dealers with sufficient material,” says Ritter.

This is only possible because the company decided in 2019 to focus strategically on the medical sector and build a 6,500 m2 production hall. By mid-June, all the facilities should be ready and put into operation. Under normal circumstances, a project of this kind takes around 30 weeks to complete. Now it had to be completed in just three weeks.

“This rapid tempo was only possible because KUKA robots could be delivered quickly, and the SAR Group created additional capacity through high flexibility in the supply chain, so that the systems could be designed and implemented so quickly”, says Ritter, who employs more than 300 people in his company.