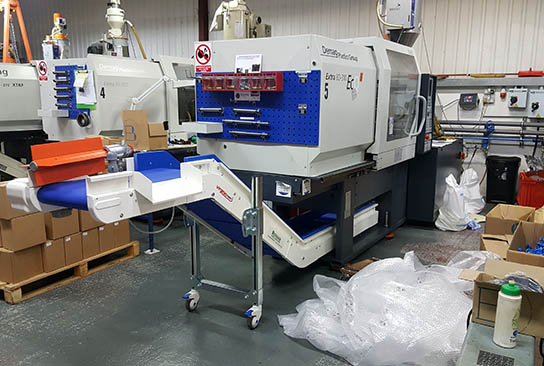 When Dorking based Broanmain Plastics sought to improve their mould shop efficiency, Renmar Plastics Machinery provided the solution. Custom conveyors rather than robots were the answer…

Established for more than sixty years, MRA Engineering became known as Broanmain Plastics in the early 70’s. When the current MD, Wilf Davis took the reigns in 1981, the company specialised in compression moulding. Following the addition of a second site focussed on injection moulding, turnover grew to over £1 million.

The two sites were brought under one roof in 2011, and today Broanmain Plastics is recognised as a leading technical trade moulder, running injection, compression and DST technologies. Growth has continued in recent years, turnover projected to hit £1.8 million in 2018.

The company has launched an investment programme aimed at both improving efficiency and increasing manufacturing capacity. One recent project focussed on labour intensive post moulding operations.  Machines are frequently run fully automatic, with both products and runner system ejected together.

Working in partnership with Renmar Plastics Machinery, four custom-made Virginio Nastri conveyors were designed and manufactured to Broanmain’s exacting specification. Design was optimised for product capture and automated segregation of runners from mouldings.

According to Renmar’s Dan Horne, this level of customisation isn’t unusual:

“Around 60-70% of the conveyors we supply are not off the shelf solutions. A site visit usually determines the exact sizing and design required to both correctly fit the production equipment involved and to minimise product damage or loss.”

“Time spent in sorting of parts is considerably reduced due to the automated removal of sprues. The design of the new conveyors also prevents parts from spilling onto the floor, reducing both contamination and labour associated with our housekeeping”.

“We already have Virginio Nastri conveyors and other equipment from Renmar in our mould shop, so asked for a site visit to measure up for this latest requirement. After spending time with me on site assessing the different options, Kristy determined that we would be best to go with four swan neck conveyors at different lengths ranging between 3.5 and 5 metres.”

“Despite the specification including special infeed chutes and paddle separators, and the order being placed prior to the Christmas shutdown, the conveyors were delivered in under 10 weeks from order.”

The purchase of the conveyors is mid-way through an investment programme which has also seen the building of a mould shop extension and the purchase of a new Sumitomo Demag injection moulding machine. Thomas Catinat continued:

“Our team are thrilled to see new investment in the areas in which they work and to see their lives being made easier and less labour intensive. The success of the projects undertaken to date has prompted further investments to be rolled out over the next 12 months”.