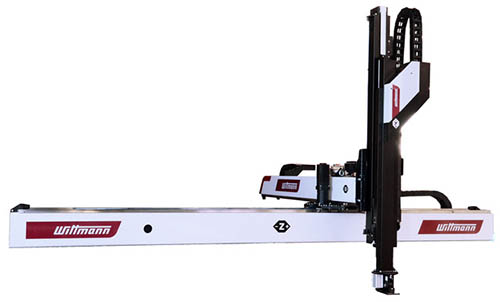 2017 has been a highly successful year for the WITTMANN Group’s robot business. The result could hardly have been more positive: the company’s robot segment reached a new record in sales.

Even though the production capacities at the robot manufacturing plants in Mosonmagyaróvár (Hungary) and at the Austrian headquarters in Vienna were extended substantially during the last two years, these capacities were fully utilised throughout the year 2017, due to the high demand. A total of 5,000 robots were shipped from the four existing robot plants of the WITTMANN Group in Europe, China and the USA.

Parallel to the increased demand for standard robots, the demand for automation solutions has also grown. Designed and manufactured at the local WITTMANN production plants – and using the shortest possible communication channels – all solutions are invariably tailored to fit the needs of the local users in the best possible way. A necessity, which also justifies the extensions of the production facilities in Nuremberg, Germany and in Písek, Czech Republic, which are currently still under way, and which will provide additional capacities for automation and gripper systems. The extension of the automation segment in the USA was already completed in 2016 and ran to full capacity in the following year. Moreover, the automation department of the WITTMANN Group’s Indian subsidiary was also extended last year.

This past year has also brought about numerous innovations on the product side. For example, two new appliances were introduced in the PRIMUS robot series, i.e. PRIMUS 14 and PRIMUS 16. These new robot models have been optimised for standard pick-and-place applications and recommend themselves by their excellent price-performance ratio.

Another new model is the W853 pro robot. With its 45kg payload, it takes up the position between the W843 pro with 35 kg and the W863 pro with 75kg payload. Its innovative rotating servo axes come with an even more compact design, thus minimising the mould opening stroke to achieve even shorter parts removal times. With the R9 robot control system, which offers numerous new functions, a very special new development has been launched. This control system stands out by its integrated digital robot twin functionality, which is available as standard. This is an identical digital image (or simulation) of the physical robot. It enables virtual validation of a given programmed process at any time – without any risks for the actual processing machine or the robot. And although the display screen of the new R9 TeachBox has now been enlarged to a diagonal of 10.1″, its weight has been reduced by 150 g compared to the predecessor model, which improves ergonomics and contributes to fatigue-free work.

In the 2018, WITTMANN will again demonstrate its innovative strength with a number of new products and features in the area of robots and automation systems.