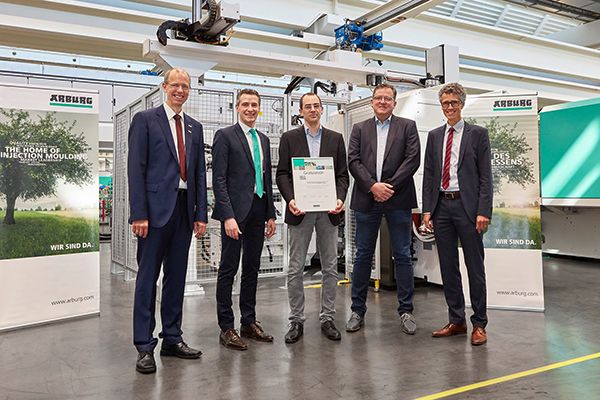 Berker’s high-quality plastic components have been produced using Arburg injection moulding machines for the last 40 years. A very special event celebrating decades of successful cooperation was scheduled for April 2018: the ceremonial handover of the 100th Allrounder.

The Berker brand belongs to the Hager Group and manufactures switch series and building technology systems. The products, for which the high-quality plastic components have now been produced for the last 40 years by Berker using injection moulding machines from Arburg, are in use worldwide.

“With our 100th Arburg machine, we are entering new dimensions. It is the first three-component Allrounder and also the first in machine size 630 S with 2,500 kN of clamping force”, says a delighted Head of Production, Sebastian Walther, who together with Christoph Koch of the Berker production management team travelled to Arburg Lossburg in order to officially take delivery of the anniversary machine.

The Allrounder 630 S is equipped with a Multilift robotic system and is integrated in a sophisticated turnkey system. “We will use this production cell for the fully automated production of a new switch series”, explains Sebastian Walther, who is very satisfied with the overall implementation of the project. “We only came to Lossburg armed with the mould drawing and, on the basis of that, developed a completely new production concept together with Arburg. Now we have an efficient turnkey solution that fully meets our high demands – thanks to the close cooperation with Arburg experts from the areas of application technology, turnkey systems and sales.”

At the ceremonial handover of the anniversary machine, Ralf Müller, Head of Technology & Key Account Management, expressed his thanks for the trust and continued cooperation: “Since the purchase of the first Allrounder in 1978, there has hardly been a year in which Berker did not buy a machine from us. Their machine fleet now comprises hydraulic, hybrid and electric Allrounders, as well as vertical machines. From 2003, the Multilift robotic systems and in 2008 the Arburg host computer system (ALS) were added.” With the successful implementation of the turnkey system, the Berker-Arburg cooperation has now entered a new dimension. In memory of the “100th Allrounder for Berker” anniversary, Ralf Müller presented Sebastian Walther and Christoph Koch with a certificate and a plaque.