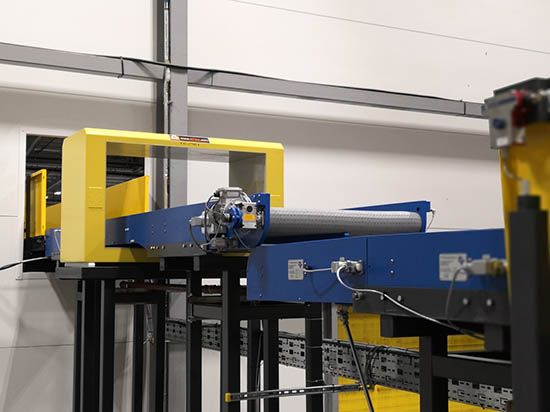 3PA Ltd were tasked with designing, building and installing an innovative and unique conveyor system for a large distribution warehouse.

When products where returned to the warehouse, workers would remove the product from the cardboard boxes for repackaging. The cardboard would then be placed on a waste conveyor and transported to a central baler.

However, on occasion small batteries would be left in cardboard boxes and would end up causing fires in the baler. This situation caused many hours of downtime and lost money on repairing the fire damage.

3PA worked closely with the customer and designed several different systems that would best suit their requirements. The customer opted for a tunnel detector with trap door reject conveyor to dispose of the contaminated boxes.

The conveyor system was installed in line with the existing conveyance already in the warehouse. The trap door was linked to the detector, when metal was detected, the trap door conveyor would receive the signal. After a set amount of time, the conveyance would stop, open the trap door and the contaminated box would fall to the bin below, the system would then automatically restart, and the process would continue.