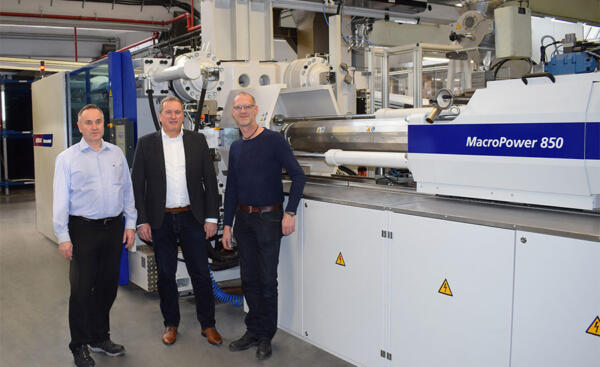 The STIEBEL ELTRON Group, headquartered in Holzminden, Germany, ranks among the market and technology leaders worldwide in the areas of household technology and renewable sources of energy. The group’s plastics competence center is located in the Hessian city of Eschwege, where all plastic parts for the European production plants as well as small appliances with a high proportion of plastics are manufactured in 4 shifts, such as small storage heaters for 5 to 15 l of water, hand dryers, electric kettles and quick-response heaters. To produce the plastic parts, STIEBEL ELTRON in Eschwege uses standard injection moulding as well as special processes, such as 2-component injection moulding, film insert moulding or injection embossing.

The cooperation with BATTENFELD has continued for over 30 years. Around half of the 28 injection moulding machines installed in Eschwege have come from WITTMANN BATTENFELD. The machine commissioned in July 2019 is a model from the MacroPower series, a MacroPower 850/5100 with 8,500 kN clamping force. The machines from the MacroPower series stand out by their compact footprint, high energy efficiency, minimal locking and pressure build-up times as well as easy mould insertion.

The newly acquired MacroPower 850 is now the fifth machine from the MacroPower series installed at STIEBEL ELTRON.