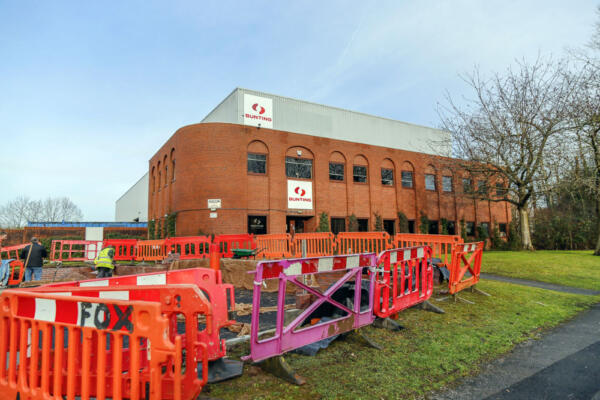 Bunting is one of the world’s leading designers and manufacturers of magnetic separators, metal detectors, magnets, magnetic assemblies and magnetising equipment. The Bunting European manufacturing facilities are in Redditch, just outside Birmingham, and Berkhamsted, both in the United Kingdom.

Since the global Bunting Group acquired Master Magnets in January 2017, manufacturing output at the Redditch plant has increased significantly. Redditch is the European manufacturing headquarters for magnetic separators and metal detectors.

Work on the expansion started in November 2019, creating additional car parking space for employees and visitors. However, the major work begins in January 2020. The investment programme covers three separate areas with a completion date of Autumn 2020.  Initially, the entire roof of the existing manufacturing plant is being replaced, followed by two separate building projects to increase manufacturing and office space.

By extending the existing manufacturing building, Bunting intends to increase the factory floor space by 50%.

“We design and manufacture large equipment for the mining, mineral processing and recycling industries,” explained Adrian Coleman, the General Manager of Bunting-Redditch. “The demand for such magnetic separation technology continues to grow, and we needed to rethink our manufacturing strategy.  The increased manufacturing floor space will result in improved productivity with the aim of shortening production lead-times.”

At the front of the Redditch facility, there will be an additional third floor of offices increasing the overall office floor space by over 50%. The whole office layout is being revamped to accommodate a growing internal team and a new ‘Centre of Excellence’ laboratory.

The laboratory in Redditch is one of the most advanced for magnetic separation in the world. Companies processing and mining minerals send samples to the laboratory for controlled tests. The tests demonstrate what separation is possible, ultimately leading to a process guarantee on a purchased production-sized magnetic separator. The new Centre of Excellence is three times larger with designated areas for both wet and dry testing. This latest investment in Bunting’s European laboratory facilities follows the creation of a Recycling Test Centre in February 2018.

“The Redditch expansion is driven by increased demand,” explained Adrian.  “As mineral and raw material reserves dwindle, companies are forced to exploit less pure reserves and process recycled materials. Our equipment separates impurities from such materials or recovers the valuable metallic constituents, and we are seeing a significant increase in both enquiries and orders.”