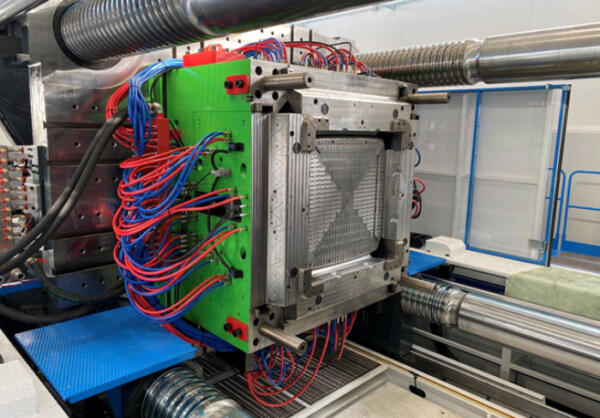 Following several years of sustained sales growth for its large tools for boxes, pallets, crates and waste containers, Italian toolmaker Euro Stampi has decided to expand its business with the purchase of a second manufacturing site and new machinery.

Already a leader in the design and manufacturing of large injection tools for boxes, pallets, crates and waste containers, as well as medium-to-large size tools for other products, Euro Stampi aim at consolidating its position in the market.

Work started on the new site in mid-2019 and will soon be completed. The new site will accommodate the large injection machine park of Euro Stampi, which is used for trials of tools built in-house and available for custom moulding.

In November 2020, a new 4800T injection machine has been installed. It is one of the largest machines in Italy and will allow Euro Stampi to test and run tools up to 120 T weight for products up to 40 kgs in weight. The machine is equipped with a robot to allow a fully automatic production.

“Investing is always positive, but investing during these pandemic times is a great step forward that not everybody can claim,” explained Maurizio Foroni, Sales & Project Manager at Euro Stampi.

“The new site will allow us to separate toolmaking from our testing and moulding activity, which were until now in the same factory. In the existing site, we will be able to increase  the space for toolmaking considerably, which was not sufficient anymore due to the strong increase in workload we have had over the last years.”

This new machine will be added to the 4 already existing at Euro Stampi (750T, 1400T, 2000T, and 3500T). This way Euro Stampi will be able to test 100% of the tools built in-house and mould an extensive range of custom products. The new factory will allow Euro Stampi to increase production space by 50% for toolmaking in its existing site.

“Thanks to these investments we intend to give to our customers an even more effective service and an even higher quality” explained Maurizio. “We are also evaluating further investments. As soon as the new site will be fully equipped we will be glad to provide you with an update.”